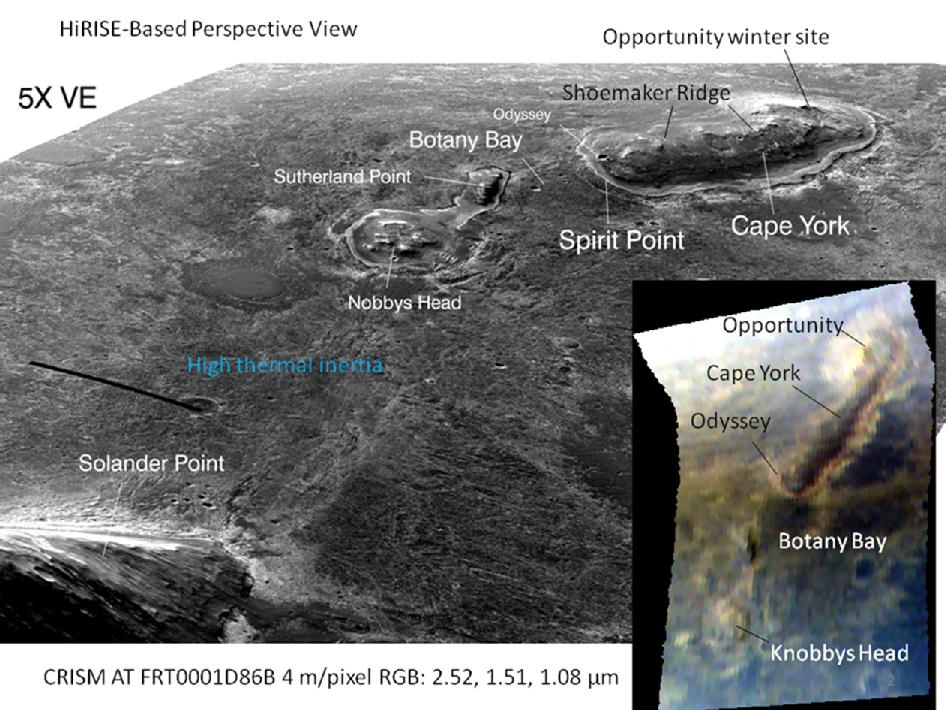 This graphic combines a perspective view of the "Botany Bay" and "Cape York" areas of the rim of Endeavour Crater on Mars, and an inset with mapping-spectrometer data. Major features are labeled. In the perspective view, the landscape's vertical dimension is exaggerated five-fold compared with horizontal dimensions. NASA's Mars Exploration Rover Opportunity examined targets in the Cape York area during the second half of 2011. The perspective view was generated by producing an elevation map from a stereo pair of images from the High Resolution Imaging Science Experiment (HiRISE) camera on NASA's Mars Reconnaissance Orbiter, then draping one of the HiRISE images over the elevation model. Other image products from the HiRISE observations used in generating this view are at http://hirise.lpl.arizona.edu/ESP_018701_1775 and http://hirise.lpl.arizona.edu/ESP_018846_1775.

The inset presents data from the Compact Reconnaissance Imaging Spectrometer for Mars (CRISM) instrument on the Mars Reconnaissance Orbiter. In this CRISM observation, taken on March 29, 2011, and catalogued as FRT0001D86B, data were acquired using an oversampled gimbal motion in the spacecraft's along-track direction, producing an enhanced-resolution view in that direction. Data have been processed to 13 feet (4 meters) per pixel, compared with the instrument's usual 59 feet (18 meters) per pixel. Three different infrared wavelengths -- 2.52, 1.51 and 1.08 micrometers -- are presented as red, green and blue in the image.

The feature "Shoemaker Ridge" was given its informal name after one of the founding fathers of planetary geology, Eugene Shoemaker.

HiRISE is operated by the University of Arizona, Tucson. The instrument was built by Ball Aerospace & Technologies Corp., Boulder, Colo. The Johns Hopkins University Applied Physics Laboratory, Laurel, Md., led the effort to build the CRISM instrument and operates CRISM in coordination with an international team of researchers from universities, government and the private sector. NASA's Jet Propulsion Laboratory, a division of the California Institute of Technology in Pasadena, manages the Mars Reconnaissance Orbiter and Mars Odyssey projects for NASA's Science Mission Directorate, Washington. Lockheed Martin Space Systems, Denver, built both orbiters.