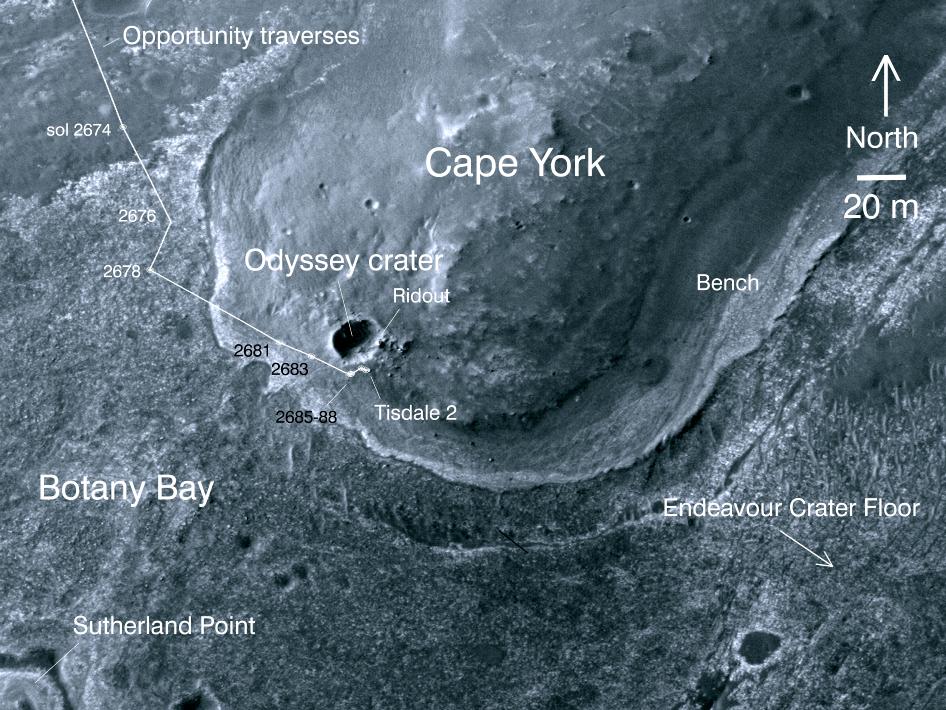 This image taken from orbit shows the path of the path driven by NASA's Mars Exploration Rover Opportunity in the weeks around the rover's arrival at the rim of Endeavour crater. The sol number (number of Martian days since the rover landed on Mars) are indicated along the route. Sol 2674 corresponds to Aug. 2, 2011; Sol 2688 corresponds to Aug. 16, 2011.

The base image of the map is a portion of an image taken by the High Resolution Imaging Science Experiment (HiRISE) instrument on NASA's Mars Reconnaissance Orbiter, on July 23, 2010. Other image products from this observation are available at http://hirise.lpl.arizona.edu/ESP_018701_1775 .

NASA's Jet Propulsion Laboratory, a division of the California Institute of Technology, Pasadena, manages the Mars Exploration Rover Project and the Mars Reconnaissance Orbiter Project for the NASA Science Mission Directorate, Washington.The University of Arizona, Tucson, operates the HiRISE camera, which was built by Ball Aerospace & Technologies Corp., Boulder, Colo. Lockheed Martin Space Systems, Denver, is the spacecraft development and integration contractor for the project and built the spacecraft.