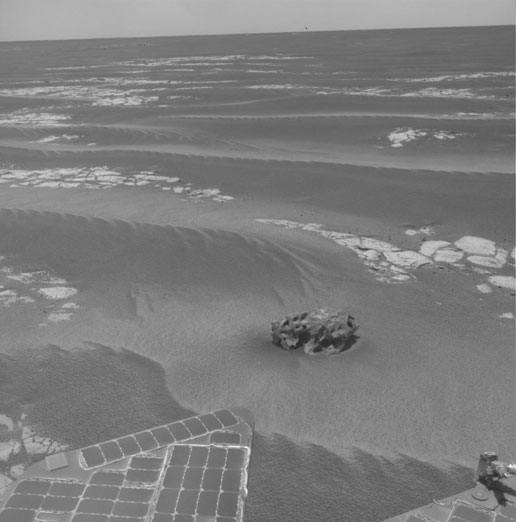 NASA's Mars Exploration Rover Opportunity has found a rock that apparently is another meteorite, less than three weeks after driving away from a larger meteorite that the rover examined for six weeks.

Opportunity used its navigation camera during the mission's 2,022nd Martian day, or sol, (Oct. 1, 2009) to take this image of the apparent meteorite dubbed "Shelter Island." The pitted rock is about 47 centimeters (18.5 inches) long. Opportunity had driven 28.5 meters (94 feet) that sol to approach the rock after it had been detected in images taken after a drive two sols earlier.

Opportunity has driven about 700 meters (about 2,300 feet) since it finished studying the meteorite called "Block Island" on Sept. 11, 2009.