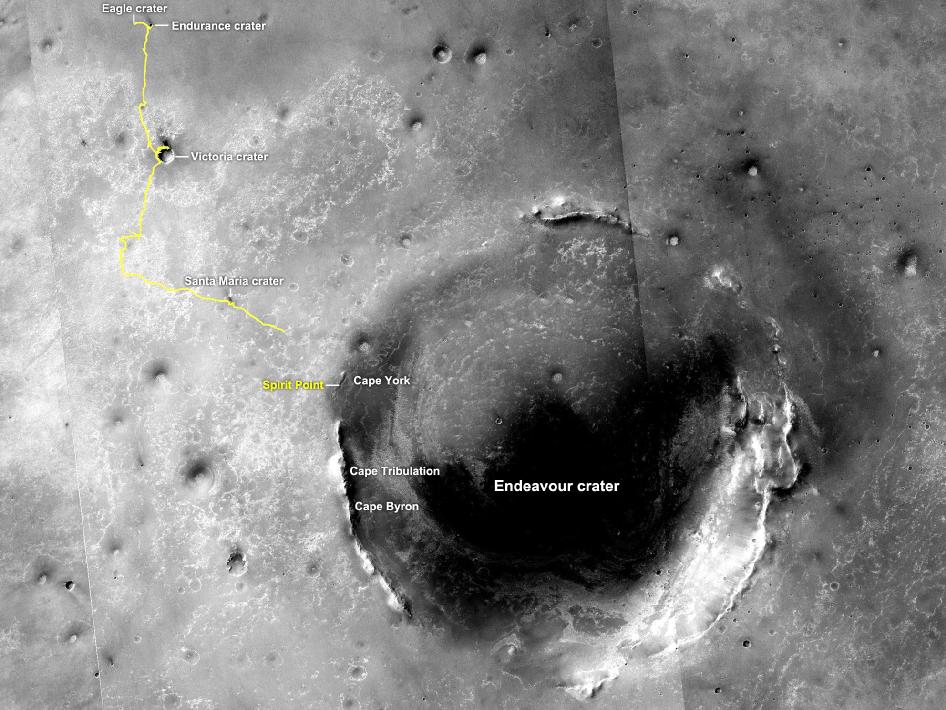 The yellow line on this map shows where NASA's Mars Rover Opportunity has driven from the place where it landed in January 2004 -- inside Eagle crater, at the upper left end of the track -- to a point about 2.2 miles (3.5 kilometers) away from reaching the rim of Endeavour crater.

In honor of Opportunity's rover twin, the team has chosen "Spirit Point" as the informal name for the site on Endeavour's rim targeted for Opportunity's arrival at Endeavour. Spirit, which worked halfway around Mars from Opportunity for more than six years, ended communication in March 2010.

The base map is a mosaic of images from the Context Camera on NASA's Mars Reconnaissance Orbiter. It is used by rover team member Larry Crumpler of the New Mexico Museum of Natural History and Science, Albuquerque, for showing the regional context of Opportunity's traverse.

Opportunity and Spirit completed their three-month prime missions in April 2004 and continued operations in bonus extended missions. The Mars Reconnaissance Orbiter reached Mars in 2006, completed its prime mission in 2010, and is also working in an extended mission. NASA's Jet Propulsion Laboratory, a division of the California Institute of Technology in Pasadena, manages the Mars Exploration Rover Project and the Mars Reconnaissance Orbiter for the NASA Science Mission Directorate, Washington. Malin Space Science Systems, San Diego, built and operates the orbiter's Context Camera.