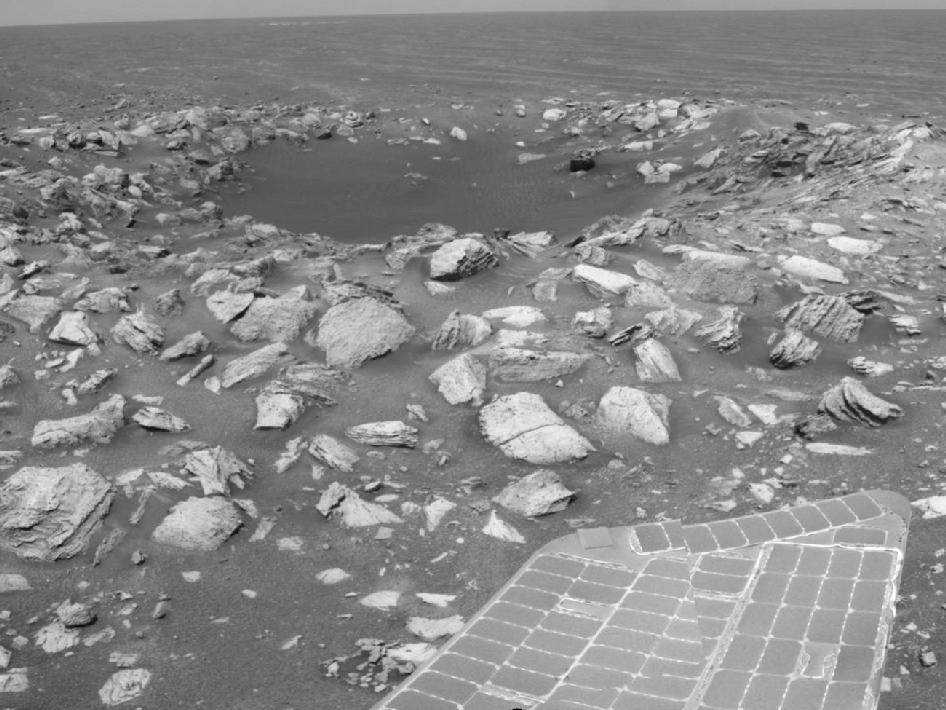 Opportunity Beside a Small, Young Crater

NASA's Mars Exploration Rover Opportunity used its navigation camera to take the exposures combined into this view of a wee crater, informally named "Skylab," along the rover's route. The component images were taken during the 2,594th Martian day, or sol, of the rover's work on Mars (May 12, 2011), after Opportunity had driven 239 feet (72.7 meters) that sol.

This is a young crater about 30 feet (9 meters) in diameter. How young? The blocks of material ejected from the crater-digging impact sit on top of the sand ripples near the crater. This suggests, from the estimated age of the area's sand ripples, that the crater was formed within the past 100,000 years. The dark sand inside the crater attests to the mobility of fine sand in the recent era in this Meridiani Planum region of Mars.

The view spans 216 degrees of the compass, from northwest on the right to south on the right. It is presented as a cylindrical projection.

Opportunity successfully completed its three-month prime mission on Mars in April 2004 and has continued in bonus extended missions since then. NASA's Jet Propulsion Laboratory, a division of the California Institute of Technology in Pasadena, manages the Mars Exploration Rover Project for the NASA Science Mission Directorate, Washington.