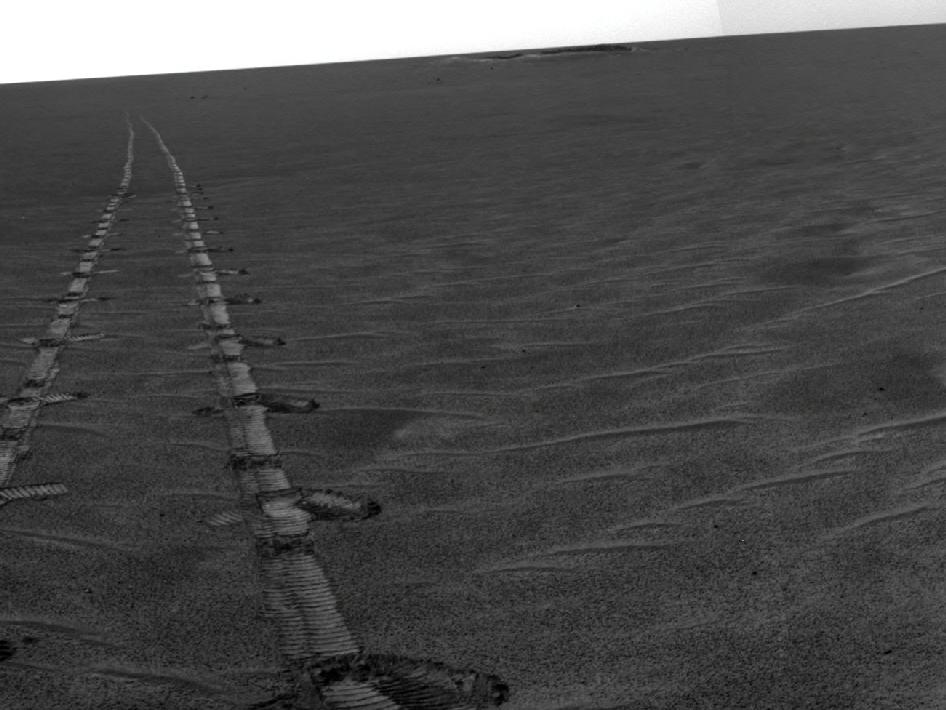 A dance-step pattern is visible in the wheel tracks near the left edge of this scene recorded by the navigation camera on NASA's Mars Exploration Rover Opportunity during the 2,554th Martian day, or sol, of the rover's work on Mars (April 1, 2011). The pattern comes from use of a new technique for Opportunity to autonomously check for hazards in its way while driving backwards. For scale, the distance between the parallel tracks of the left and right wheels is about 1 meter (about 40 inches).

The view looks back after Sol 2554's drive at the tracks imprinted by the drive. The drive covered at total of 118.6 meters (389 feet). Rover drivers had planned the drive based on images taken from the rover's Sol 2553 location.

The first portion -- which imprinted the more distant, simpler, tracks -- was a backward "blind" drive. Rover drivers command blind drives -- either forward or backward -- when they can assess the safety of the terrain well enough from the images taken at the drive's starting point that they don't need the rover to pause and look for obstacles along the route. For the Sol 2554 drive over flat ground, the drivers chose a blind drive of 100 meters (328 feet). They commanded Opportunity to begin using backward autonomous navigation after it reached the end of the blind drive on that sol. That "backward autonav" driving imprinted the nearest portion of the tracks visible here.

The rover team began using the backward autonav strategy last year as a modification of forward autonav, which the team has used since the rovers' first year on Mars. In autonav mode, the rover pauses periodically during a drive, uses its stereo navigation camera to view the route in the intended drive direction, analyzes the images for potential hazards in the route, and makes a decision about what to do based on that analysis.

One catch, when driving backwards, is that the navigation camera's view is partially blocked over the rear of the rover by the low-gain antenna. So, lest a hazard be hidden behind that antenna, the backward autonav technique includes turning the rover 17.5 degrees away from the drive direction just before taking the navigation camera images. This gives the camera an unobstructed view in the drive direction. This little maneuver -- repeated every 1.2 meters -- is what created the dance-step pattern in the foreground portion of the rover tracks in this image.

This mosaic combining several pointings of the navigation camera is presented in a cylindrical projection. The center of the image is toward the northeast, and the full view covers a sweep of 252 degrees, from westward on the left to southeastward on the right.

Opportunity has been exploring the Meridiani Planum region of Mars since early 2004 in a mission originally planned to last for three months. Both Opportunity and Spirit have made important discoveries about wet environments on ancient Mars that may have been favorable for supporting microbial life. NASA's Jet Propulsion Laboratory, a division of the California Institute of Technology in Pasadena, manages the Mars Exploration Rover Project for NASA's Science Mission Directorate, Washington.