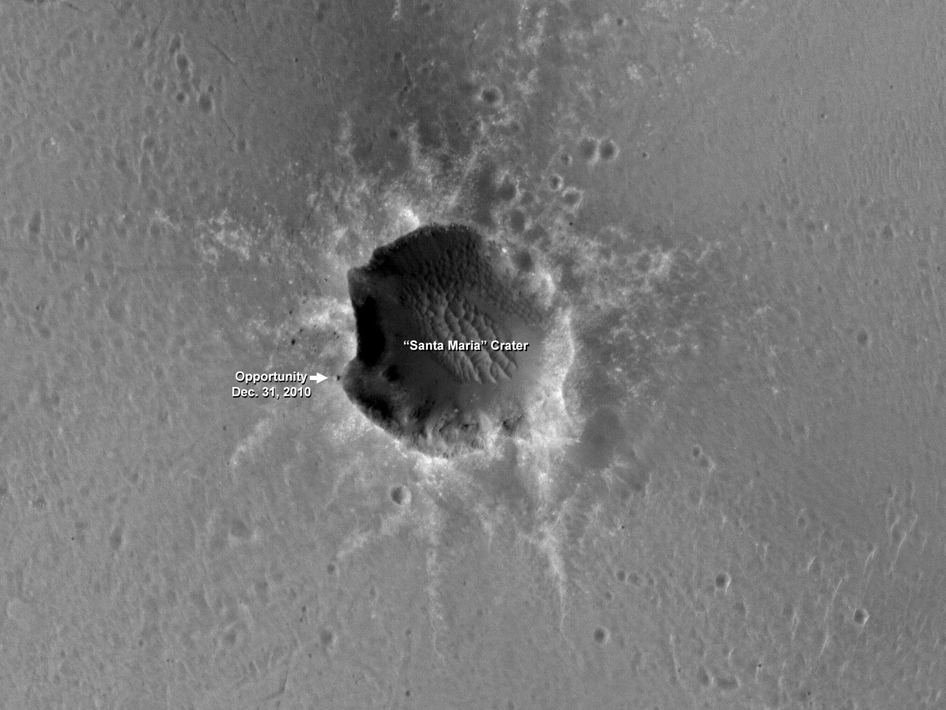 The High Resolution Imaging Science Experiment (HiRISE) camera on NASA's Mars Reconnaissance Orbiter acquired this image of the Opportunity rover on the southwest rim of "Santa Maria" crater on New Year's Eve 2010, or Martian day (sol) 2466 of the rover's work on Mars.

Opportunity is imaging the crater's interior to better reveal the geometry of rock layers as a means of defining the stratigraphy and the impact process. Santa Maria is a relatively young, 90-meter-diameter (295-foot-diameter) impact crater. Note the blocks of ejected material around the crater. It is old enough to collect sand dunes in its interior.

Santa Maria crater, located in Meridiani Planum, is about 6 kilometers (4 miles) from the rim of the much larger Endeavour crater, Opportunity's long-term destination. The rim of Endeavour contains spectral indications of phyllosilicates, or clay bearing minerals believed to have formed in wet conditions that could have been more habitable than the later acidic conditions in which the sulfates Opportunity has been exploring formed.

Data from the Compact Reconnaissance Imaging Spectrometer for Mars, which is also on the Mars Reconnaissance Orbiter, show indications of hydrated sulfates on the southeast edge of the Santa Maria crater. The rover team plans to use Opportunity to investigate that area through the solar conjunction period in late January and early February. During that period, Mars is almost directly behind the sun from Earth's perspective, and commanding from Earth to Mars spacecraft is restricted. After that, Opportunity will traverse to the northwest rim of Endeavour crater, aided tremendously by HiRISE images like this for navigation and targeting interesting smaller craters along the way.