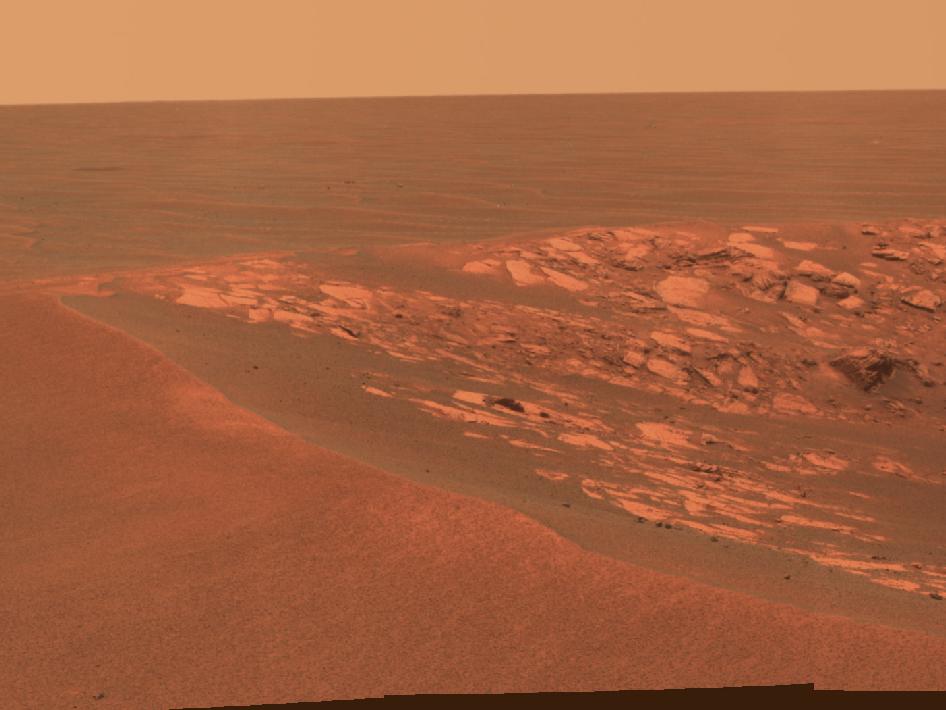 "Intrepid" crater on Mars carries the name of the lunar module of NASA's Apollo 12 mission, which landed on Earth's moon Nov. 19, 1969. NASA's Mars Exploration Rover Opportunity recorded this view of the crater during the 2,417th Martian day, or sol, of the rover's work on Mars (Nov. 11, 2010).

This view is presented in approximately true color, combining exposures taken by Opportunity's panoramic camera (Pancam) through three filters admitting wavelengths of 752 nanometers, 535 nanometers and 432 nanometers. Intrepid crater is about 20 meters (66 feet) in diameter. That is about the same size as the crater where Opportunity spent its first two months on Mars: Eagle crater. The rover's look-back image into Eagle crater after driving out of it in 2004 is at http://photojournal.jpl.nasa.gov/catalog/PIA05755.

The rover science team uses a convention of assigning the names of historic ships of exploration as the informal names for craters seen by Opportunity. Apollo 12's lunar module Intrepid carried astronauts Alan Bean and Pete Conrad to the surface of Earth's moon while crewmate Dick Gordon orbited overhead in the mission's command and service module, Yankee Clipper. A view of Bean next to Intrepid on the moon is online at http://spaceflight.nasa.gov/gallery/images/apollo/apollo12/html/as12-46-6749.html . An image of Conrad inspecting robotic lander Surveyor 3, with Intrepid on the lunar horizon nearby, is online at http://spaceflight.nasa.gov/gallery/images/apollo/apollo12/html/as12-48-7133.html .