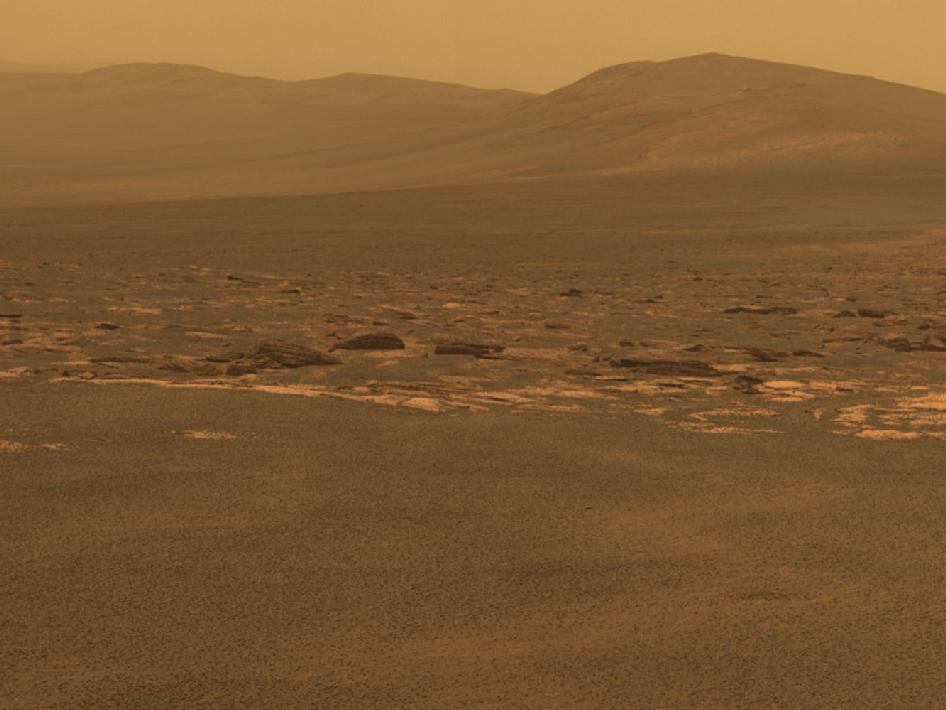 A portion of the west rim of Endeavour crater sweeps southward in this color view from NASA's Mars Exploration Rover Opportunity. This crater -- with a diameter of about 14 miles (22 kilometers) -- is more than 25 times wider than any that Opportunity has previously approached during the rover's 90 months on Mars.

Endeavour crater has been the rover team's destination for Opportunity since the rover finished exploring Victoria crater in August 2008. Endeavour offers access to older geological deposits than any Opportunity has seen before.

The closest of the distant ridges visible along the Endeavour rim is informally named "Solander Point." Opportunity may investigate that area in the future. The rover's first destination on the rim, called "Spirit Point" in tribute to Opportunity's now-inactive twin, Spirit, is to the left (north) of this scene.

The lighter-toned rocks closer to the rover in this view are similar to the rocks Opportunity has driven over for most of the mission. However, the darker-toned and rougher rocks just beyond that might be a different type for Opportunity to investigate.

The ground in the foreground is covered with iron-rich spherules, nicknamed "blueberries," which Opportunity has observed frequently since the first days after landing. They are about 0.2 inch (5 millimeters) or more in diameter.

This view combines images taken through three different Pancam filters admitting light with wavelengths centered at 753 nanometers (near infrared), 535 nanometers (green) and 432 nanometers (violet). This "natural color" is the rover team's best estimate of what the scene would look like if humans were there and able to see it with their own eyes. Seams have been eliminated from the sky portion of the mosaic to better simulate the vista a person standing on Mars would see.