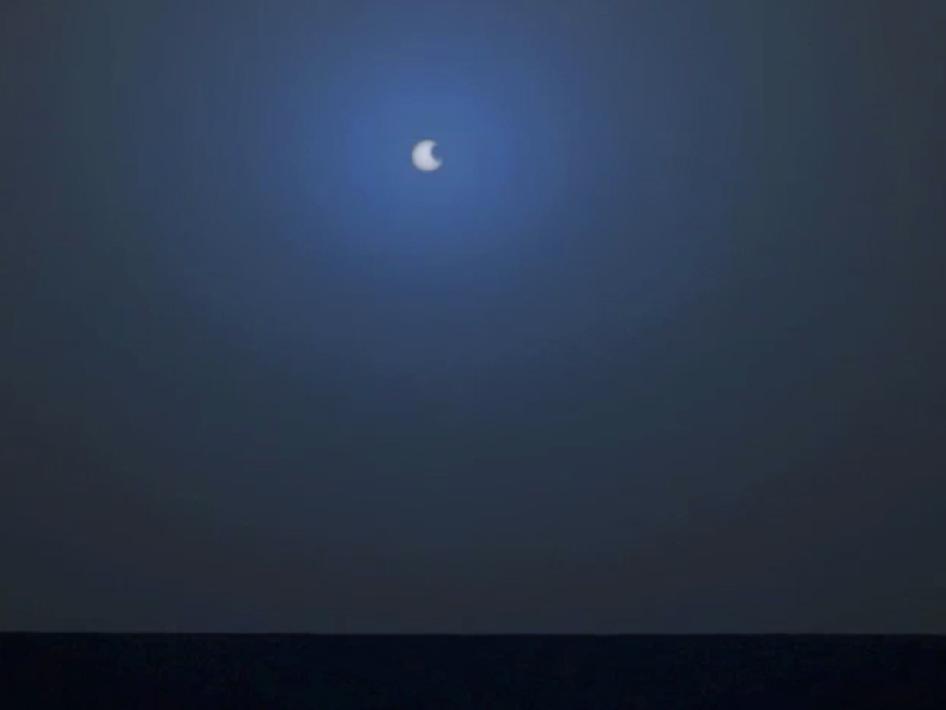 The larger of the two moons of Mars, Phobos, transits (passes in front of) the sun in this approximately true-speed movie simulation using images from the panoramic camera (Pancam) on NASA's Mars Exploration Rover Opportunity taken on the rover's 2,415th Martian day, or sol (Nov. 9, 2010). The movie includes images that have been calibrated and enhanced, plus simulated frames used to smooth the action.

Images of solar transits of Phobos and the other Mars moon, Deimos, taken over many years by Mars rovers aid in studies of slight changes in the moons' orbits.

This movie is based on 10 individual photos taken through the Pancam's special solar filter every four seconds during the transit, which lasted about 32 seconds. The images were gradually blended together to create a simulated near-real-speed animation of the event. The moviemakers supplemented those images with sky color information from a pair of images taken right after the transit through two regular imaging filters: one centered on a wavelength of 440 nanometers (blue) and the other on 750 nanometers (near infrared).

The silhouette of Phobos looks smaller than in some other Mars rover transit images (for example, http://photojournal.jpl.nasa.gov/catalog/PIA05554) because when Phobos is near the horizon it is more than 30 percent farther from the camera's location than when it is straight overhead.