Opportunity advanced 13.38 meters (44 feet) toward the edge of Victoria Crater on Aug. 21. Mission controllers were taking advantage of gradual clearing of dust from the sky while also taking precautions against buildup of dust settling onto the rover. 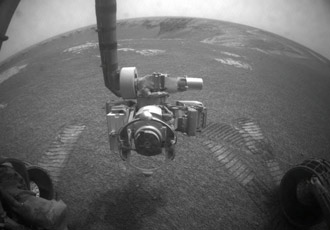 Image right: NASA's Opportunity rover used its front hazard-identification camera to obtain this image at the end of a drive on the rover's 1,271st sol, or Martian day (Aug. 21, 2007). Image credit: NASA/JPL-Caltech
+ Full image and caption

"Weather and power conditions continue to improve, although very slowly for both rovers," said John Callas of NASA's Jet Propulsion Laboratory, Pasadena, Calif, project manager for the rovers. With the improved energy supplies, both rovers are back on schedule to communicate daily. Opportunity had previously been conserving energy by going three or four days between communications.

No new storms have been lifting dust into the air near either solar-powered rover in the past two weeks. Skies are gradually brightening above both Spirit and Opportunity. "The clearing could take months," said rover Project Scientist Bruce Banerdt. "There is a lot of very fine material suspended high in the atmosphere."

As that material does settle out of the air, the powdery dust is accumulating on surfaces such as the rovers' solar panels and instruments. More dust on the solar panels lessens the panels' capacity for converting sunlight to electricity, even while more sunlight is getting through the clearer atmosphere.

Opportunity's daily supply of electricity from its solar panels reached nearly 300 watt-hours on Aug. 23. That is more than twice as much as five weeks ago, but still less than half as much as two months ago. It is enough to run a 100-watt bulb for three hours.

One reason the rover team chose to drive Opportunity closer to the crater rim was to be prepared, if the pace of dust accumulation on the solar panels increases, to drive onto the inner slope of the crater. This would give the rover a sun-facing tilt to maximize daily energy supplies. The drive was also designed to check performance of the rover's mobility system, so it included a turn in place and a short drive backwards.

The next day, a favorable wind removed some dust from Opportunity's solar panels, providing a boost of about 10 percent in electric output. This forestalled the need to hurry to a sun-facing slope. The team is still excited to get Opportunity inside Victoria Crater to examine science targets on the inner slope that were identified in June, shortly before dust storms curtailed rover activities. An estimate of how soon Opportunity will enter the crater will depend on assessments in coming days of how dust may be affecting the instruments and of how much energy will be available.

On Spirit, dust on the lens of the microscopic imager has slightly reduced image quality for that instrument, although image calibration can compensate for most of the contamination effects. The team is experimenting with ways to try dislodging the dust on the lens. Spirit's solar arrays are producing about 300 watt hours per day as dust accumulation on them offsets clearing skies. Spirit drove 42 centimeters (17 inches) backwards on Aug. 23 to get in position for taking images of a rock that it had examined with its Moessbauer spectrometer. The rover team is planning additional drives for Spirit to climb onto a platform informally named "Home Plate."