Spirit is even being commanded to move its arm for the first time in nearly three weeks. It will position the arm's microscopic imager to take a series of photographs of two soil targets and one rock target. Opportunity's planned science observations are for studies of the atmosphere. 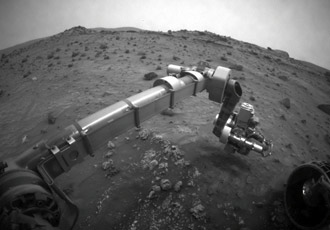 The increased output from the solar panels, though slight, has allowed Opportunity to fully charge its batteries and Spirit to bring its batteries to nearly full charge. Also, the temperature of the core electronics module on Opportunity, which was of concern when it fell to minus 35 degrees Fahrenheit (minus 37 Celsius) last week, has increased to minus 28.1 degrees Fahrenheit (minus 33.4 degrees Celsius).

"Conditions are still dangerous for both rovers and could get worse before things get better," said John Callas, rover project manager at NASA's Jet Propulsion Laboratory, Pasadena, Calif.

"We will continue our cautious approach to the weather and configure the rovers to maintain a high state of charge on the batteries. Communication sessions with both rovers will remain limited until the skies clear further."