Mars Exploration Rover Status Report: Spirit Sees Dustier Sky
As of Thursday, July 26, NASA rovers Spirit and Opportunity are both enduring levels of reduced power supply. The rovers can survive at these levels, but NASA continues to sharply restrict their activities.

Spirit is under the dustiest sky ever seen at that location. Sunlight at Spirit's location is more obscured than current conditions for Opportunity, though not as severe as what Opportunity faced a week ago. 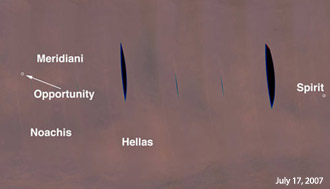 Mission controllers Thursday received the first status report from Opportunity in three days. This delay had been planned between transmissions to minimize the rover’s energy use. Energy output from Opportunity's solar panels has climbed above 200 watt hours per day (enough to run a 100 watt bulb for two hours), compared with daily levels as low as 128 watt hours last week. Light must reach the solar panels for them to provide electricity.

Opportunity has resumed measurements of how obscured the sun is. These had been suspended for several days to save power. The new measurement included in Thursday's downlink indicates slight clearing. However, some dust has freshly settled onto the solar panels, lessening the increase in power output.

"We are still waiting out the storms, and we don't know how long they will last or how bad they will get," said John Callas, rover project manager at NASA's Jet Propulsion Laboratory, Pasadena, Calif.

Each rover has eight radioisotope heater units that supplement electric heaters for keeping batteries and electronics within their operating temperature ranges. The radioisotope heater units use the decay heat from plutonium-238. Each of them provides about one watt of heat. They aid the rovers' survival on very low-power days and through cold nights, though the electric heaters are also necessary.

Controllers are keeping Opportunity on an extremely low-power-use plan under which the rover transmits information to Earth only once every three days. A heater switch that has been stuck in the on position since landing day makes Opportunity more vulnerable to low power than Spirit. Spirit has suspended most activities, but is still communicating daily.