Dust Delays Mars Crater Entry
A giant dust storm brewing for more than a week on Mars has become worse and is affecting surface operations of the Mars Exploration Rovers, Spirit and Opportunity. Because the rovers depend on solar energy for survival, and the dust is partially blocking the sun, the storm is being watched closely by the rover scientists and engineers. Opportunity's entry into Victoria Crater is delayed for at least several days.

The storm, the most severe storm yet to hit the rovers, is expected to continue for at least another week. Opportunity is perched near "Duck Bay" as it readies to descend into Victoria Crater, but operations were scaled back on Saturday, June 30, to conserve power. 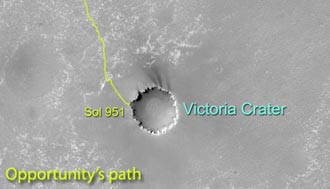 Image right: The route followed by NASA's Mars Exploration Rover Opportunity from its landing site through the 1,215th Martian day (or sol) of its mission (June 24, 2007), is marked on this map. Image credit: NASA/JPL/Cornell/MSSS/Ohio State University
+ Full image and caption

"The storm is affecting both rovers and reducing the power levels on Opportunity," said John Callas, Mars Exploration Rover project manager at NASA's Jet Propulsion Laboratory, Pasadena, Calif. "We are keeping an eye on this as we go forward, but our entry into Victoria Crater will be delayed until no sooner than July 13."

"We have some data that show the atmospheric opacity is decreasing, so the storm might have peaked and we may have passed the worst of this. The situation could improve quickly from here, but we will have to wait and see," said Callas.

Pictures from the orbiter's Mars Color Imager show the storm is regional in extent, and includes several local areas of especially high dust activity. The storm has been moving eastward and toward mid-latitudes, and is now also causing an increase in atmospheric dust at Spirit's location, on the opposite side of the planet at Gusev Crater. Dust levels at Gusev remain much lower than at the Opportunity site, however.

Both rovers take daily measurements estimating the amount of dust in the atmosphere. The less dust the better, because it means more sunlight reaches the rover's solar panels, which power the vehicles. In the last week, Opportunity has broken its dust record, with the opacity level rising from 1.0 to 3.3. Solar array energy on Opportunity dropped from 765 watt-hours to 402 watt-hours over the same period of time.

"While this only represents enough dust to coat the planet to about the thickness of a human hair, it is enough to decrease the brightness of the noon sun by 96 percent compared to a completely clear atmosphere," said Steve Squyres, principal investigator, Cornell University, Ithaca, N.Y. "Of course, the solar arrays also receive light that is scattered from the dust, so the decrease in power is not nearly that great."

"We have not seen dust measurements this high on either rover before. If the dust levels were to increase further and stay elevated for several days, there is a risk to how well Opportunity could continue to work in this darkened environment," said Callas.