NASA Mars Rover Churns Up Questions With Sulfur-Rich Soil
Some bright Martian soil containing lots of sulfur and a trace of water intrigues researchers who are studying information provided by NASA's Spirit rover.

"This material could have been left behind by water that dissolved these minerals underground, then came to the surface and evaporated, or it could be a volcanic deposit formed around ancient gas vents," said Dr. Ray Arvidson of Washington University, St. Louis. He is the deputy principal investigator for NASA's twin Mars rovers, Spirit and Opportunity.

Determining which of those two hypotheses is correct would strengthen understanding of the environmental history of the Columbia Hills region that Spirit has been exploring since a few months after landing on Mars in January 2004. However, investigating the bright soil presents a challenge for the rover team, because the loose material could entrap the rover. 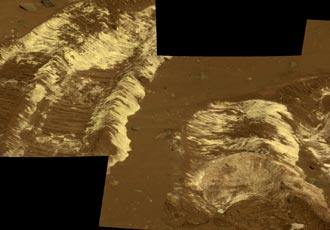 Image right: While driving eastward toward the northwestern flank of "McCool Hill," the wheels of NASA's Mars Exploration Rover Spirit churned up the largest amount of bright soil discovered so far in the mission. This image, taken on the rover's 788th Martian day, or sol, of exploration (March 22, 2006), shows the strikingly bright tone and large extent of the materials uncovered. Image credit: NASA/JPL-Caltech/Cornell
+ Larger view

The bright white and yellow material was hidden under a layer of normal-looking soil until Spirit's wheels churned it up while the rover was struggling to cross a patch of unexpectedly soft soil nearly a year ago. The right front wheel had stopped working a week earlier. Controllers at NASA's Jet Propulsion Laboratory, Pasadena, Calif., were trying to maneuver the rover backwards, dragging that wheel, to the north slope of a hill in order to spend the southern-hemisphere winter with solar panels tilted toward the sun.

Due to the difficulty crossing that patch, informally named "Tyrone," the team chose to drive Spirit to a smaller but more accessible slope for the winter. Spirit stayed put in its winter haven for nearly seven months. Tyrone was one of several targets Spirit examined from a distance during that period, using an infrared spectrometer to check their composition. The instrument detected small amounts of water bound to minerals in the soil.

The rover resumed driving in late 2006 when the Martian season brought sufficient daily sunshine to the solar panels. Some of the bright soil from Tyrone was dragged to the winter site by the right front wheel, and Spirit spent some time measuring the composition and mineralogy of these materials. The material is sulfur-rich and consists of sulfate salts associated with iron, and likely calcium. "These salts could have been concentrated by hydrothermal liquid or vapor moving through the local rocks," said rover science team member Dr. Albert Yen, a geochemist at JPL. Two other patches of bright soil uncovered by Spirit before Tyrone were also sulfur-rich, but each had similarities to local rock compositions that were different at the three sites, suggesting localized origins.

Scientists are describing recent findings by Spirit and Opportunity at the Lunar and Planetary Science Conference this week in League City, Texas.

Spirit has driven away from the Tyrone area for a clockwise circuit around a plateau called "Home Plate." Researchers want to learn more about Home Plate, which Spirit visited briefly in early 2006. They are checking a hypothesis that explosive volcanism, driven by the interaction of magma with water, formed Home Plate and similar features.

Halfway around Mars, Opportunity is exploring clockwise around "Victoria Crater," a bowl about 800 meters (half a mile) across. Cliff-like promontories alternate with more gradually sloped alcoves around the scalloped rim. The impact that dug the crater exposed layers that had been buried.

"The images are breathtaking," said Dr. Steve Squyres of Cornell University, principal investigator for the rovers. "Every promontory we've seen has the kinds of layering expected for ancient wind-blown sand deposits."

The layers consist of sulfate-rich sandstone similar to other bedrock Opportunity has been finding in Mars' Meridiani region for more than three years. The minerals come from a wet period in the region's ancient past. While exploring Victoria's rim with Opportunity, researchers have been on the lookout for rocks that might have been tossed out from layers deeper and older than the sulfates.

"We found one group of cobbles that were clearly more resistant to erosion than the sulfate blocks thrown out onto the rim," Squyres said. "We checked the composition of one that we called Santa Catarina. Our suspicion now is that Santa Catarina is a piece of a meteorite." That would be the fifth meteorite found by the rovers.

More than three years into what was planned as a three-month mission on Mars, both Spirit and Opportunity remain in good health, though with signs of aging. "The team has learned how to drive Spirit very well with just five wheels," said JPL's Dr. John Callas, rover project manager. "We could accomplish longer drives if there were more energy, but Spirit's solar panels have gotten really dusty. We would welcome another wind-related cleaning event." It's about the same time of year on Mars now as it was when winds blew dust off Spirit and its solar panels in 2005, increasing energy output.

JPL, a division of the California Institute of Technology, Pasadena, manages the Mars Exploration Rover project for NASA's Science Mission Directorate. For images and information about the rovers, visit http://www.nasa.gov/rovers .