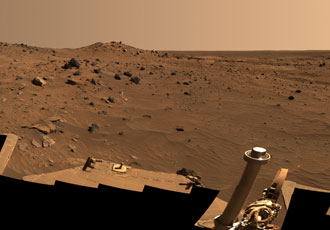 A color 360-degree panorama released today -- produced from the most detailed imaging yet completed by either Spirit or its twin, Opportunity -- shows rugged terrain of the robot's current location amid a range of hills. The vista, dubbed the "McMurdo Panorama," comes from Spirit's panoramic camera and is available online .

Spirit has been examining the surroundings for several months while perched with a tilt to the north for maximum solar energy during winter in Mars' southern hemisphere. The rover team at NASA's Jet Propulsion Laboratory, Pasadena, Calif., plans to resume driving the rover in coming weeks as Martian spring approaches.