The new position gave Opportunity a glimpse of the crater's opposite wall. That view from the navigation camera on the rover is available online at http://www.nasa.gov/mission_pages/mer/images/20060919.html . 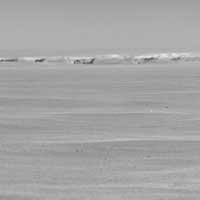 "Opportunity has been heading toward Victoria for more than 20 months, with no guarantee it would ever get there, so we are elated to see this view," said Justin Maki of NASA's Jet Propulsion Laboratory, Pasadena, Calif., an imaging scientist on the rover team. "However, we still have another two or three short drives before Opportunity is really right at the rim, looking down into the crater."

Once Opportunity reaches the rim, the rover?s panoramic camera will begin the task of creating a high-definition color mosaic. That mosaic of images will provide scientists not only with a beautiful view of the crater, but will also provide geologic details of the crater walls.

The great lure of Victoria is the expectation that a thick stack of geological layers will be exposed in the crater walls, potentially several times the thickness that was previously studied at Endurance and, therefore, potentially preserving several times the historical record. Opportunity and its twin, Spirit, are robotic geologists with instruments for examining rocks to learn about the ancient environmental conditions that existed at the times the rocks were formed. Opportunity has already found exposed rock layers that were formed in flowing surface water and other layers formed as windblown sand. Analyzing the layers at Victoria could extend the story further back in time.

JPL, a division of the California Institute of Technology, manages the Mars Exploration Rover mission for the NASA Science Mission Directorate, Washington. For additional images and information about the mission, visit http://www.nasa.gov/mission_pages/mer .