Near the martian equator, where the rovers are exploring opposite sides of the red planet, highs and lows make Earth temperatures look downright tropical. Temperatures often differ by more than 100 degrees Celsius. That's a change of 180 degrees Fahrenheit -- the equivalent of having the temperature drop from a high of 70 degrees F. at midday to minus 110 degrees F. the same night. That would be like going from a beach in Hawaii to the South Pole in mid-winter ... every day!

Though both rovers are exploring Mars well beyond their initial 90-day missions, electrical connections and moving parts are showing signs of temperature-related fatigue.

"Every day we have a huge thermal cycle," notes Jake Matijevic, chief of the rover engineering team. "That causes the solder in electrical connections to expand and contract until it breaks."

During their exploration of Mars, the rovers have recorded temperatures ranging from midday highs of about 35 degrees C. (95 degrees F.) in spring and summer to nighttime lows of about minus 110 degrees C. (minus 166 degrees F.) in winter. Spirit has experienced greater temperature swings because its location is farther from the martian equator, where sunlight is seasonally either more direct or less direct than at Opportunity's location.

Image to left: Solar Panel Temperatures -- Spirit
Summer temperatures on Spirit's solar arrays have reached summertime highs of more than 30 degrees C. and winter lows of about minus 110 degrees C. The image in the background shows the rover's view of "Husband Hill" after cliimbing down from the top. Image credit: NASA/JPL-Caltech/Cornell/NMMNH
+ View larger image
Three Years of Data

Rover engineer Dan Porter has been tracking temperatures recorded by 50 or so sensors on each of the rovers since shortly after they landed on Mars in January 2004. The results are not only of interest to scientists, they're a favorite of human audiences as well.

"People ask about this all the time," says New Mexico geologist Larry Crumpler, a member of the Mars rover science team who created the charts showing monthly average temperatures superimposed on panoramic-camera images from each of the rovers. "These plots of daily temperature are destined to become an important part of all my public outreach talks."

Just as on Earth, temperatures on Mars are not uniform everywhere. Objects exposed to direct sunlight are apt to be warmer than those in the shade. Some objects retain heat better than others. A source of relative warmth on Mars is rocky terrain, because it retains heat better than sandy terrain. 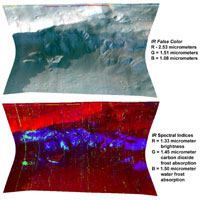 Image to left: Colder in the Shade
On Mars as on Earth, surfaces shaded from sunlight are more likely to develop a veneer of frost. This pair of images taken by the Compact Reconnaissance Imaging Spectrometer for Mars, on board the Mars Reconnaissance Orbiter, shows water frost in shaded areas and carbon dioxide frost in only the coldest of those. Image credit: NASA/JPL-Caltech/JHU APL. + View larger image

A solar panel is sort of like a "warm wall in mid-winter," says Crumpler. Components beneath the solar panels, such as the hazard avoidance cameras, are closer in temperature to the martian air. Unlike Earth, Mars does not have a thick, atmospheric blanket to seal in warmth by night or minimize the Sun's heat by day.
Wear and Tear

Engineers have traced stalls in a shoulder joint on Opportunity's robotic arm to a broken electrical wire. The shoulder motor has experienced greater temperature swings than other parts because of its location beside a heater that has been stuck in the "on" position since shortly after landing.

Notes Matijevic, "Our theory is that one of the wires in the electrical coil broke free and disabled the motor."

Rover drivers have compensated for Spirit's stuck wheel by driving on the other five wheels. They have compensated for Opportunity's stalled shoulder joint by unstowing it before going to sleep at night. This way, if the motor fails during the night, when temperatures are at their lowest, they would still have limited use of the arm by operating the remaining working joints. Each rover has lost a few temperature sensors as well, while dozens more continue operating.

"How long will it take for us to see other sorts of things related to temperature swings? We don't know," says Matijevic. "We know it matters over time, but we don't know how many of these swings we'll see before we lose a component.

"Meanwhile, we're applying for a fifth extended mission for both rovers."