Winter Solstice on Mars: Rovers Look Forward to A Second Martian Spring
Like the fabled tortoise that, in the race with the hare, moves slowly yet accomplishes much, NASA's Mars Exploration Rover Spirit has continued to make progress little by little, while essentially running in place.

Eking out a steady stream of scientific data as solar power levels have plunged to a seasonal low during the rover's second Martian mid-winter, Spirit has discovered meteorites that might otherwise have been missed and completed work on a 360-degree, full-color panorama of its surroundings. The rover has collected long-term observations of the Martian atmosphere, rocks, and soils under varying conditions of sunlight, temperature, and wind. 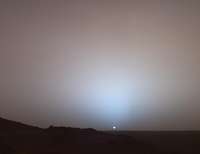 Image to left
Spirit acquired this view of the Martian sunset from Gusev Crater on April 23, 2005. Using data from images such as this, scientists have learned that twilight on Mars is longer than on Earth, lasting for up to two hours before sunrise or after sunset. Dust high in the atmosphere scatters light to the night side of the planet. Similar twilights are seen on Earth following major volcanic eruptions.
Image Credit:NASA/JPL-Caltech/Cornell/Texas A&M
+ View larger image

"Spirit has conducted a regular routine of scientific observations," said Jake Matijevic, rover engineering team chief, "though they haven't been very extensive each day because the energy levels don't allow that. After the solstice, we'll turn the rover to investigate a different part of the surface. We'll move very carefully to preserve our tilt toward the sun."

The winter solstice falls on Tuesday, Aug. 8, 2006, Spirit’s 923rd sol, or Martian day, of exploration. Since April, the rover has been parked on an outcrop known as "Low Ridge Haven," tilted 11 degrees to the north.

On the opposite side of the planet, Spirit's twin, Opportunity, continues to advance toward Victoria Crater, the largest crater yet visited on the surface of Mars. While exploring Martian plains north of the equator, Opportunity, too, has experienced lower power levels during the southern hemisphere winter, though not to the same degree as Spirit.

Image above
Opportunity took this approximate true-color mosaic of images of "Beagle Crater" from a distance of about 25 meters (82 feet). The crater is thought to be relatively young based on its prominent, raised rim and surrounding ejecta that have not been eroded away or buried by sand.
Image credit: NASA/JPL-Caltech/Cornell
+ View larger image

Opportunity recently arrived at another, smaller crater known as "Beagle Crater," which is 35 meters (115 feet) wide. Scientists plan to spend some time examining rocks that were excavated onto the surface during the impact that formed the crater. Opportunity is collecting full-color panoramic images of the site.

Like Spirit, Opportunity will have more power for science operations as the days grow longer before and after the vernal equinox on Feb. 8, 2006, when the lengths of the day and night will be equal. On Earth, the vernal equinox is considered the official start of spring.

No Stranger to Adversity

As the sun moves toward zenith and power levels increase, the biggest challenge for Spirit will be mobility. Last March, Spirit's right front wheel stopped working. Engineers safely navigated the rover to its winter haven, in part because they had learned to drive Spirit alternatively backward and forward on five wheels in 2004, when the right front wheel temporarily began drawing excess power. 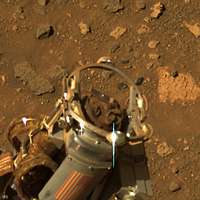 Using this maneuver, the rover dragged the ailing wheel behind the vehicle, carving a trench in the sand.

Rover handlers are optimistic that Spirit will be able to explore all but the steepest or sandiest terrain.

"I think we should be able to drive Spirit 10 to 15 meters (30 to 45 feet) a day when solar power is restored to optimum levels," observed Matijevic. "Sandy areas are going to have to be treated as obstacles. We'll be looking for routes that are not too rocky but that also do not have much sand."

Bruce Banerdt, project scientist for the mission, said team members were looking forward to collecting more science data as a result of having more electrical power. NASA recently agreed to extend the Mars Exploration Rover mission for another year starting in October.

"When Spirit has sufficient energy, which may be early September, we're thinking about turning the rover about 30 degrees to get a better look at the bright soil churned up by the rover's right front wheel," Banerdt said. "We'll look at the chemical composition to see if it's made of sulfate salts like other deposits we've visited. We'll have excellent data from the 13-filter, panoramic camera images to guide us to promising targets for further study." 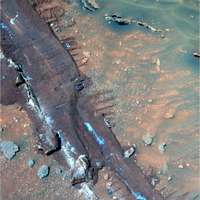 Image to left
Spirit's wheels have churned up light-colored soil that scientists are analyzing for clues to the environment in which it formed. Other light-colored soils have had a salty chemistry indicating the former presence of water. Spirit took this false-color image with the panoramic camera on the rover's 836th day, or sol (June 1, 2006), of exploration of Mars.
Image credit: NASA/JPL-Caltech/Cornell
+ View larger image

The ascending sun will also bring warmer temperatures – warmer, that is, for Mars. The coldest day of the Martian year will probably be the same as the shortest day, said Matijevic. Unlike Earth, Mars does not have a thick atmosphere to buffer changes in temperature. Though Spirit is not awake to measure the coldest temperatures in the middle of the night, models estimate that Spirit’s solar panels have recently experienced frigid temperatures of about -104 degrees C (-155 F.).

Location, however, does make a difference. Being stationed on a heat-absorbing rock has probably kept the rover slightly warmer than it would have been out on the sands of the "Inner Basin," he added.

Though surviving on Mars is always a challenge, there have been no surprises this winter. Energy levels and operating temperatures have been in agreement with what engineers predicted. "Our experiences this winter are very similar to what we experienced last winter," said Matijevic.