Overview of Approach to 'Victoria' 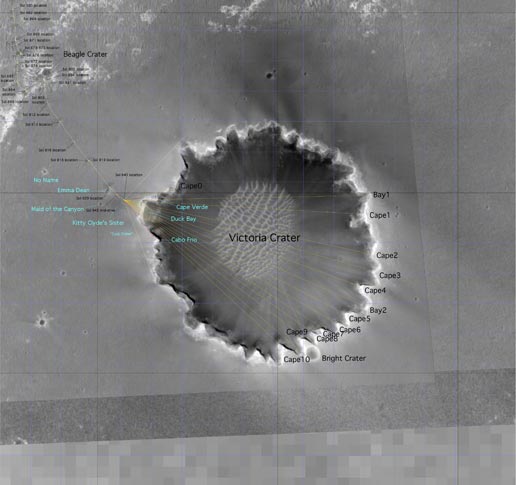 Images such as this one from the Mars Orbiter Camera on NASA's Mars Global Surveyor are helping scientists and engineers decide the best path for NASA's Mars Exploration Rover Opportunity as it approaches "Victoria Crater."

A blue dot indicates "Cape Verde" and a red dot "Cabo Frio." These two points mark the extent of the crater visible from the rover's position on its 945th Martian day, or sol (Sept. 20, 2006), a location it had reached two sols earlier and from which much of this monster depression was still out of sight. The green annotations indicate "Duck Bay," a location expected to allow a view to the other side of the crater. A dune, or ripple, is to the left of the crater, right in front of the green dot location. This is where the team initially talked about sending Opportunity for the rover's first view down into the crater. After further consideration, the team opted for a drive to the right of that ripple (south of the green dot) near the rim.

The yellow lines that surround and intersect Victoria Crater are used to measure the crater and the distance to the far "bays."

North is up. Victoria Crater is about 800 meters (half a mile) in diameter.

Image Credit: NASA/JPL-Caltech/MSSS
›Back To Top