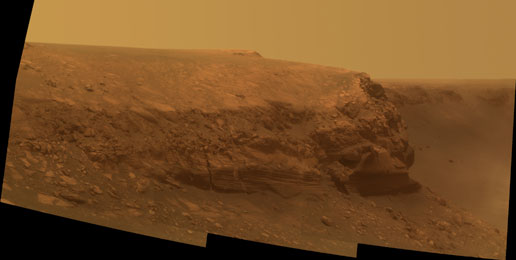 A promontory nicknamed "Cape Verde" can be seen jutting out from the walls of Victoria Crater in this approximate true-color picture taken by the panoramic camera on NASA's Mars Exploration Rover Opportunity. The rover took this picture on martian day, or sol, 1329 (Oct. 20, 2007), more than a month after it began descending down the crater walls – and just 9 sols shy of its second Martian birthday on sol 1338 (Oct. 29, 2007). Opportunity landed on the Red Planet on Jan. 25, 2004. That's nearly four years ago on Earth, but only two on Mars because Mars takes longer to travel around the sun than Earth. One Martian year equals 687 Earth days.

The overall soft quality of the image, and the "haze" seen in the lower right portion, are the result of scattered light from dust on the front sapphire window of the rover's camera.