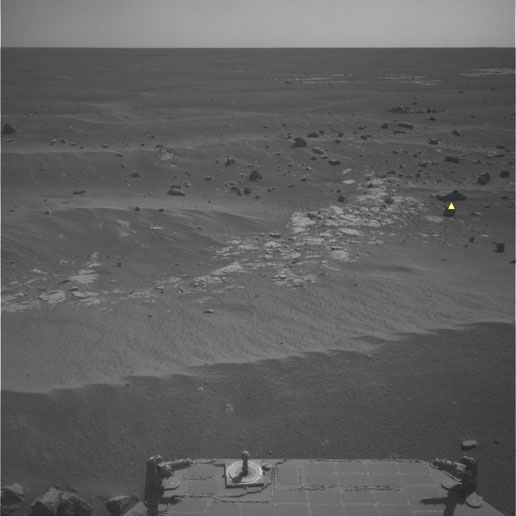 NASA's Mars Exploration Rover Opportunity took this image in preparation for the first autonomous selection of an observation target by a spacecraft on Mars.

Opportunity used its navigation camera to take this image after a drive during the 2,172nd Martian day, or sol, of its mission on Mars (March 4, 2010). Using newly developed and uploaded software named Autonomous Exploration for Gathering Increased Science, or AEGIS, the rover analyzed the image to identify the feature that best matched criteria given for selecting a target. The top target that Opportunity selected with AEGIS is shown by the yellow marker. AEGIS was directed to look for rocks that were larger and darker in color. The rover then used the software to take more detailed observations of the selected target using its panoramic camera (see http://photojournal.jpl.nasa.gov/catalog/PIA12974).

The more-than-50 rocks in this image are near a young crater called "Concepcion" and might have been thrown outward by the impact that excavated the crater.

› Full resolution jpeg
› Back To Top