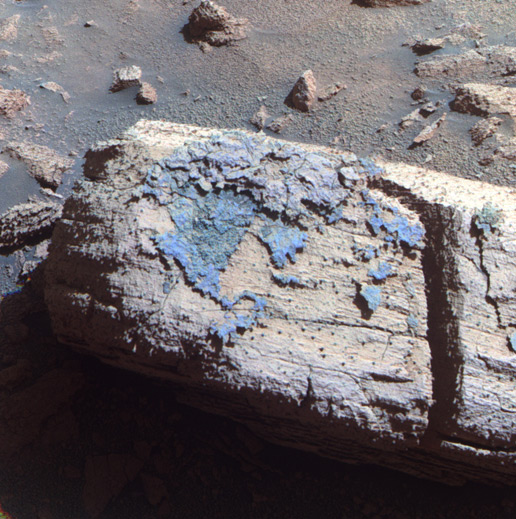 This image from the panoramic camera on NASA's Mars Exploration Rover Opportunity shows a rock called "Chocolate Hills," which the rover found and examined at the edge of a young crater called "Concepción."

The rover used the tools on its robotic arm to examine the texture and composition of target areas on the rock with and without the dark coating. The rock is about the size of a loaf of bread. Initial analysis was inconclusive about whether the coating on the rock is material that melted during the impact event that dug the crater.

This view is presented in false color, which makes some differences between materials easier to see. It combines three separate images taken through filters admitting wavelengths of 750 nanometers, 530 nanometers and 430 nanometers. Opportunity took the image during the 2,147nd Martian day, or sol, of the rover's mission on Mars (Feb. 6, 2010).