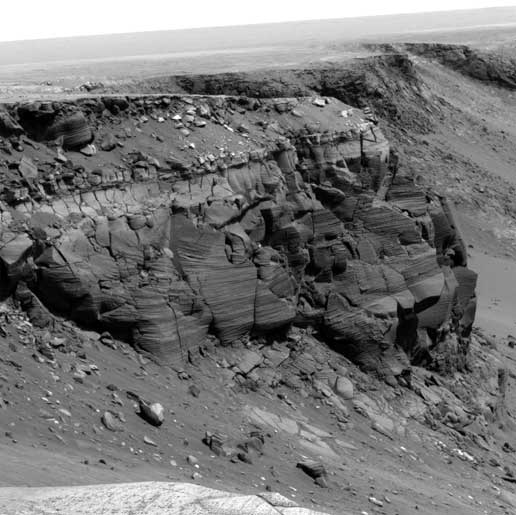 NASA's Mars Exploration Rover Opportunity rover spent about 300 sols (Martian days) during 2006 and 2007 traversing the rim of Victoria Crater. Besides looking for a good place to enter the crater, the rover obtained images of rock outcrops exposed at several cliffs along the way.

The cliff in this image from Opportunity's panoramic camera (Pancam) is informally named Cape St. Vincent. It is a promontory approximately 12 meters (39 feet) tall on the northern rim of Victoria crater, near the farthest point along the rover's traverse around the rim. Layers seen in Cape St. Vincent have proven to be among the best examples of meter scale cross-bedding observed on Mars to date. Cross-bedding is a geologic term for rock layers which are inclined relative to the horizontal and which are indicative of ancient sand dune deposits. In order to get a better look at these outcrops, Pancam "super-resolution" imaging techniques were utilized. Super-resolution is a type of imaging mode which acquires many pictures of the same target to reconstruct a digital image at a higher resolution than is native to the camera. These super-resolution images have allowed scientists to discern that the rocks at Victoria Crater once represented a large dune field, not unlike the Sahara desert on Earth, and that this dune field migrated with an ancient wind flowing from the north to the south across the region. Other rover chemical and mineral measurements have shown that many of the ancient sand dunes studied in Meridiani Planum were modified by surface and subsurface liquid water long ago.

This is a Mars Exploration Rover Opportunity Panoramic Camera image acquired on sol 1167 (May 7, 2007), and was constructed from a mathematical combination of 16 different blue filter (480 nm) images.

›  Highest resolution
›Back To Top