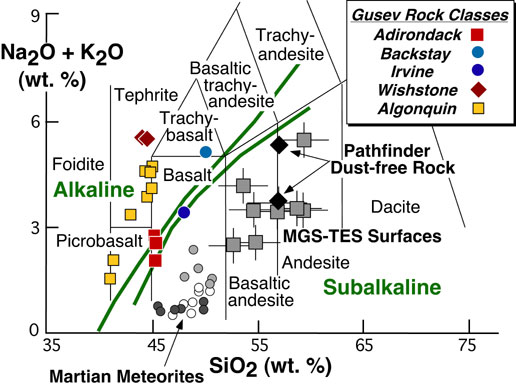 During the past two-and-a-half years of traversing the central part of Gusev Crater, NASA's Mars Exploration Rover Spirit has analyzed the brushed and ground-into surfaces of multiple rocks using the alpha particle X-ray spectrometer, which measures the abundance of major chemical elements. In the process, Spirit has documented the first example of a particular kind of volcanic region on Mars known as an alkaline igneous province. The word alkaline refers to the abundance of sodium and potassium, two major rock-forming elements from the alkali metals on the left-hand side of the periodic table.

The Gusev rocks define a new chemical category not previously seen on Mars, as shown in this diagram plotting alkalis versus silica, compiled by University of Tennessee geologist Harry McSween. The abbreviations "Na2O" and "K2O" refer to oxides of sodium and potassium. The abbreviation "SiO2" refers to silica. The abbreviation "wt. %" indicates that the numbers tell what percentage of the total weight of each rock is silica (on the horizontal scale) and what percentage is oxides of sodium and potassium (on the vertical scale). The thin lines separate volcanic rock types identified on Earth by different scientific names such as foidite and picrobasalt. Various classes of Gusev rocks (see box in upper right) all plot either on or to the left of the green lines, which define "alkaline" and "subalkaline" categories (subalkaline rocks have more silica than alkaline rocks).

Members of the rover team have named different classes of rocks after specimens examined by Spirit that represent their overall character. During the rover's travels, Spirit discovered that Adirondack-class rocks littered the Gusev plains; that Backstay, Irvine, and Wishstone-class rocks occurred as loose blocks on the northwest slope of "Husband Hill"; and that outcrops of Algonquin-class rocks protruded in several places on the southeast face.