Cobbles in Troughs Between Meridiani Ripples 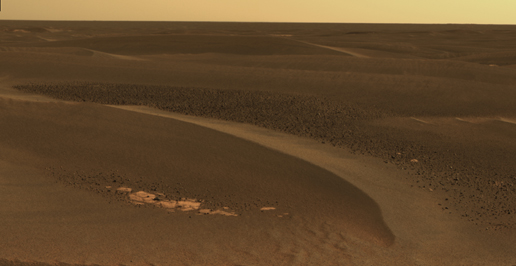 As NASA's Mars Exploration Rover Opportunity continues to traverse from "Erebus Crater" toward "Victoria Crater," the rover navigates along exposures of bedrock between large, wind-blown ripples. Along the way, scientists have been studying fields of cobbles that sometimes appear on trough floors between ripples. They have also been studying the banding patterns seen in large ripples.

This view, obtained by Opportunity's panoramic camera on the rover's 802nd Martian day (sol) of exploration (April 27, 2006), is a mosaic spanning about 30 degrees. It shows a field of cobbles nestled among wind-driven ripples that are about 20 centimeters (8 inches) high.

The origin of cobble fields like this one is unknown. The cobbles may be a lag of coarser material left behind from one or more soil deposits whose finer particles have blown away. The cobbles may be eroded fragments of meteoritic material, secondary ejecta of Mars rock thrown here from craters elsewhere on the surface, weathering remnants of locally-derived bedrock, or a mixture of these. Scientists will use the panoramic camera's multiple filters to study the rock types, variability and origins of the cobbles. This is an approximately true-color rendering that combines separate images taken through the panoramic camera's 753-nanometer, 535-nanometer and 432-nanometer filters.