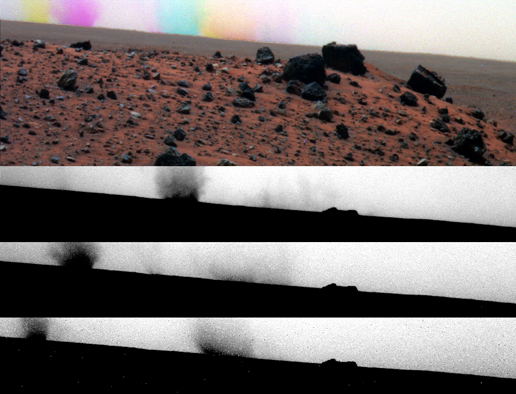 While the panoramic camera (Pancam) on NASA's Mars Exploration Rover Spirit was taking exposures with different color filters during the 1,919th Martian day of the rover's mission (May 27, 2009), dust devils moved across the field of view. Because several seconds intervened between shots with different filters, the location of the dust devils changed between the exposures.

The three grayscale images stacked from the bottom of this four-part view are the separate exposures through filters centered on wavelengths of 750 nanometers, 530 nanometers and 430 nanometers. Contrast has been stretched to emphasize the dust devils on the horizon.

At the top is a composite image combining those exposures to yield a color scene of the Martian ground. The time intervals between the exposures result in the darker dust devil appearing blue at its first location, violet at its second location and yellow at its third location. A second dust devil was consolidating during the first two exposures and appears orange at its location when the third exposure was taken. In the foreground is the northern end of a ridge called "Tsiolkovsky," about 25 meters (about 80 feet) from Troy.

Dust devils occur on both Mars and on Earth when solar energy heats the surface, resulting in a layer of warm air just above the surface. Since the warmed air is less dense than the cooler atmosphere above it, it rises, making a swirling thermal plume that picks up the fine dust from the surface and carries it up into the atmosphere. This plume of dust moves with the local wind.