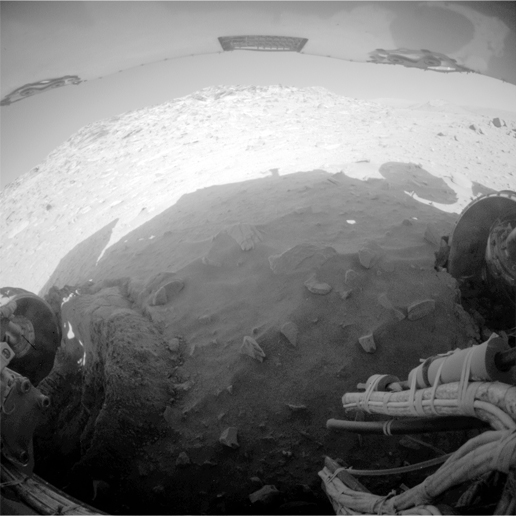 NASA's Mars Exploration Rover Spirit recorded this fisheye view with its rear hazard-avoidance camera after completing a drive during the 2,169th Martian day, or sol, of Spirit's mission on Mars (Feb. 8, 2010). The drive left Spirit in the position where the rover will stay parked during the upcoming Mars southern-hemisphere winter.

Spirit moved about 34 centimeters (13 inches) toward the south southeast in a series of drives beginning on Sol 2145 (Jan. 15, 2010). The left-rear wheel (on the right in this rear-facing view) moved out of a rut that it had dug in soft soil in April 2009. The drive motor for the right-rear wheel (on the left in this view) stopped working in late 2009, leaving the six-wheeled rover with only four functioning wheels. The top of the image shows the underside of Spirit's solar array.

The rover's solar array is tilted 9 degrees toward the south for the winter. In the three previous winters that Spirit has spent on Mars, its parked positions tilted toward northward, a better attitude for drawing energy from the sun in the northern sky. Engineers anticipate that, due to the unfavorable tilt for this fourth winter, Spirit will soon be out of communication with Earth for several months. A low-power hibernation mode will shut down almost all functions except keeping a master clock running and checking periodically on Spirit's power status until it has enough power to reawaken.