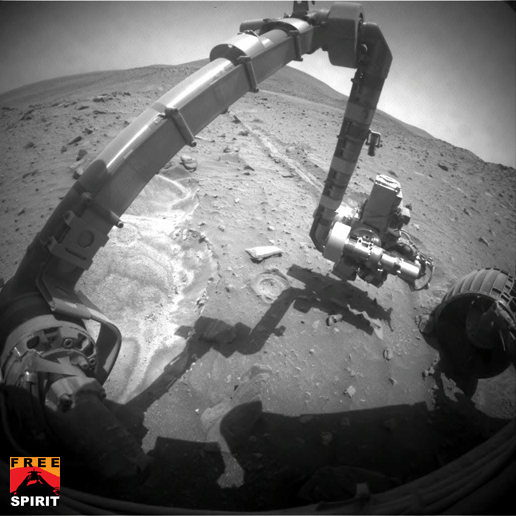 NASA's Mars Exploration Rover Spirit recorded this forward view of its arm and surroundings during the rover's 2,052nd Martian day, or sol (Oct. 11, 2009).

Bright soil in the left half of the image is loose, fluffy material churned by the rover's left-front wheel as Spirit, driving backwards, approached its current position in April 2009 and the wheel broke through a darker, crusty surface.

Spirit used its front hazard-avoidance camera to take this image. The turret of tools at the end of the rover's robotic arm is positioned with the Moessbauer spectrometer up and the rock abrasion tool extending toward the right. Spirit's right-front wheel, visible in this image, has not worked since 2006. It is the least-embedded of the rover's six wheels at the current location, called "Troy."

Spirit and its twin, Opportunity, have been working on Mars for more than 58 months in what were originally planned as three-month missions on Mars.