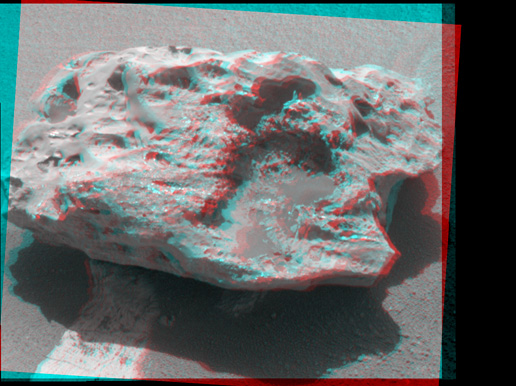 Composition measurements by NASA's Mars Exploration Rover Opportunity confirm that this rock on the Martian surface is an iron-nickel meteorite.

This image combines exposures from the left eye and right eye of the rover's panoramic camera to provide a three-dimensional view when seen through red-green glasses with the red lens on the left. The camera took the component images during the 1,961st Martian day, or sol, of Opportunity's mission on Mars (July 31), after approaching close enough to touch the rock with tools on the rover's robotic arm.

Researchers have informally named the rock "Block Island." With a width of about two-thirds of a meter (2 feet), it is the largest meteorite yet found on Mars. Opportunity found a smaller iron-nickel meteorite, called "Heat Shield Rock" in late 2004.