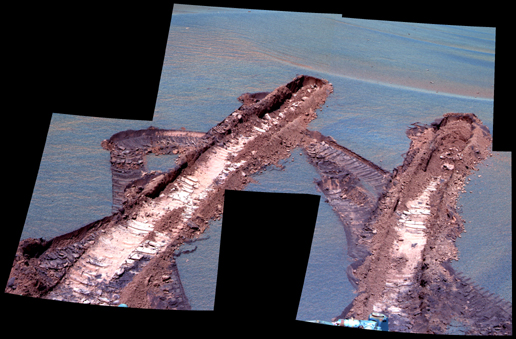 As winter has descended over Meridiani Planum, the availability of solar power for the rovers has diminished greatly. One consequence of less power for Opportunity is that there are fewer telecommunications links via the orbiting Mars Odyssey spacecraft because the rover needs to use the "deep sleep" mode overnight to conserve energy. As a result, images that are not needed specifically to help plan the next sol of operations often stay onboard for much longer time than the science team has been used to. For example, on sol 833 Opportunity became embedded within an unexpectedly deep and very fine-grained ripple, named "Jammerbugt" by the operations team, and spent the next eight sols (834-841) extricating itself.

A series of images that were quickly returned because they were needed to help plan the drive sequences. However, once the rover was free from the ripple, the science team commanded these panoramic camera image mosaics on sol 842 to show complete coverage of the wheel tracks that were left by Opportunity during the extraction process. The images are of great scientific value but were not critical for planning operations. Accordingly, they were not fully downlinked until sol 864 (June 29, 2006), about three weeks after they were obtained.