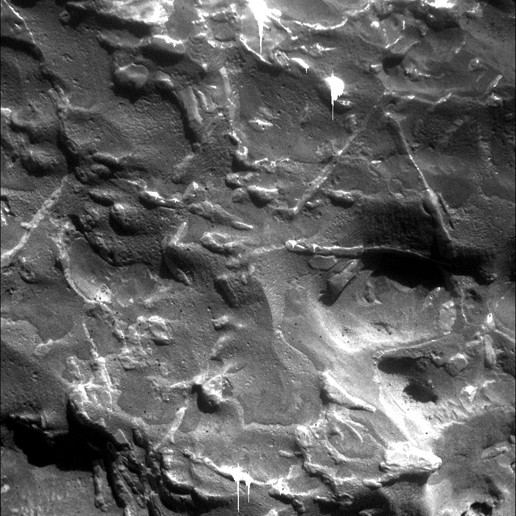 NASA's Mars Exploration Rover Opportunity used its microscopic imager to get this view of the surface of a rock called "Block Island" during the 1,963rd Martian day, or sol, of the rover's mission on Mars (Aug. 1, 2009). The triangular pattern of small ridges seen at the upper right in this image and elsewhere on the rock is characteristic of iron-nickel meteorites found on Earth, especially after they have been cut, polished and etched. Block Island has been identified as an iron-nickel meteorite based on this surface texture and analysis of its composition by Opportunity's alpha particle X-ray spectrometer. At about 60 centimeters (2 feet) across, it is the largest meteorite yet found on Mars.

This image shows a patch 32 millimeters by 32 millimeters (1.3 inches by 1.3 inches) on the surface of Block Island while the target was fully illuminated by the sun. This target on the rock is informally named "New Shoreham." The vertical white streaks, especially near the top and bottom of the image, are artifacts caused by saturation of the camera's CCD (charge-coupled device, or image recorder) where sunlight glinted off metallic facets.

The triangular pattern in the texture of iron-nickel meteorites, called the Widmanstatten pattern, formed more than 4.5 billion years ago as the metal cooled. One iron-nickel mineral, kamacite, formed thin layers along the surface of crystals of another, taenite, which contains less nickel. The two minerals differ in their resistance to either etching by acid or erosion by wind-blown sand, so those processes can make the pattern visible.

Larger view (JPG)
› Back To Top