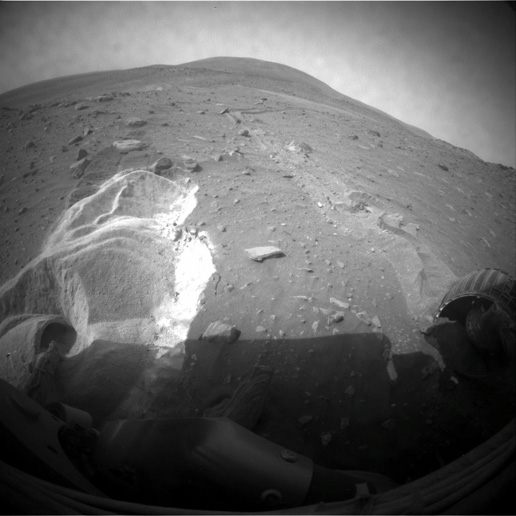 Wheel slippage during attempts to extricate NASA's Mars Rover Spirit from a patch of soft ground during the preceding two weeks had partially buried the wheels by the 1,899th Martian day, or sol, of the Spirit's mission on Mars (May 6, 2009).

Spirit took this image with its front hazard-avoidance camera on Sol 1899. With Spirit in the position shown here, the rover team temporarily suspended driving attempts while studying the ground around Spirit and planning simulation tests of driving options with a test rover at NASA's Jet Propulsion Laboratory in Pasadena, Calif.

Driving attempts between the time Spirit took a similar image http://photojournal.jpl.nasa.gov/catalog/PIA12002 10 sols earlier and when this image was taken moved the rover a total of about 36 centimeters (14 inches).

While driving backwards, the rover drags its right front wheel, which no longer rotates. For scale, the distance between the wheel tracks is about 1 meter (40 inches). This view is looking northward, with Husband Hill on the horizon.