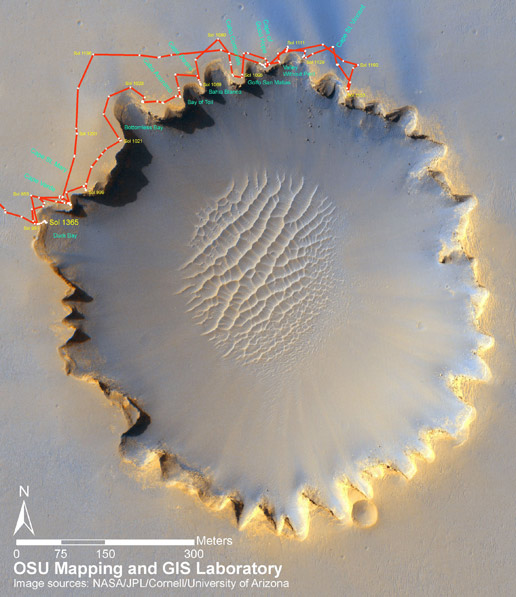 "Victoria Crater," about 800 meters (one-half mile) in diameter, has been home ground for NASA's Mars Exploration Rover Opportunity for more 14 of the rover's first 46 months on Mars. This view shows the rover's path overlaid on an image of the crater taken by the High Resolution Imaging Science Experiment on NASA's Mars Reconnaissance Orbiter.

Opportunity first reached the crater's rim on Sept. 27, 2006, during the 951st Martian day, or sol, of the rover's work in the Meridian Planum region of Mars. The rover then explored clockwise about one-fourth of the way around the rim before returning to a point close to its first overlook. On the mission's 1,293rd sol (Sept. 13, 2007), Opportunity began a sustained exploration of the interior of the crater, entering at an alcove called "Duck Bay" on the western side of Victoria. This traverse map includes Opportunity's route though Sol 1,365 (Nov. 26, 2007). The scale bar is 300 meters (984 feet) long.