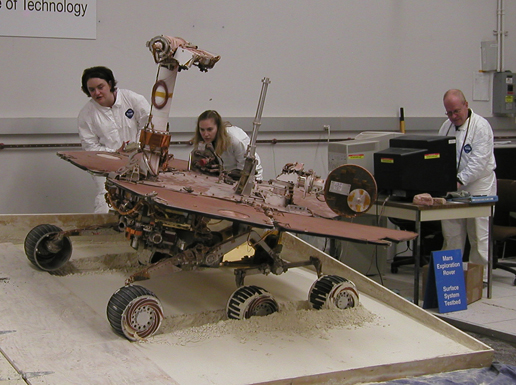 While a test rover rolls off a plywood surface into a prepared bed of soft soil, rover team members Colette Lohr (left) and Kim Lichtenberg (center) eye the wheels digging into the soil and Paolo Bellutta enters the next driving command. The test rover became embedded in the soil during this June 30, 2009, activity, as intended. The test setup simulates the situation that NASA's Mars Rover Spirit faces in a soil patch called "Troy" on Mars.

The team planned a few adjustments to more closely match Spirit's situation, such as placing a rock beneath the test rover, and then intended to begin assessing possible maneuvers for Spirit to use getting free from Troy. The test facility is in the In Situ Instrument Laboratory at NASA's Jet Propulsion Laboratory, Pasadena, Calif.