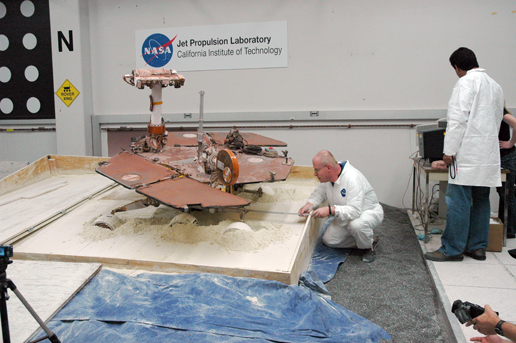 After commanding five of a test rover's six wheels to drive forward, rover driver Paolo Bellutta (left) measures how much the rover moved sideways, downslope, during the maneuver. Rover mission manager Alfonso Herrera (standing) checks computer entry of the data. This testing on July 6, 2009, was part of work at NASA's Jet Propulsion Laboratory, Pasadena, Calif., to determine the best maneuvers for NASA's Mars Explortaion Rover Spirit to use for getting out of a patch of soft soil where it is embedded on Mars. One of Spirit's six wheels, the right-front one, has not been operable since early 2006. The test setup simulates Spirit's challenging situation.