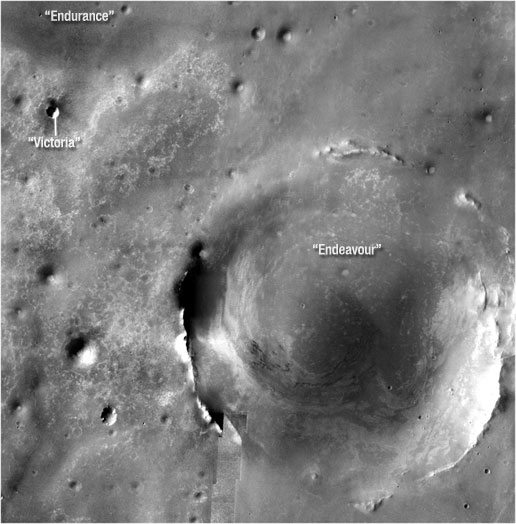 The team operating NASA's Mars Exploration Rover Opportunity has chosen southeast as the direction for the rover's next extended journey, toward a crater more than 20 times wider than "Victoria Crater." Opportunity exited Victoria Crater on Aug. 28, 2008, after nearly a year investigating the interior.

The crater to the southeast is about 22 kilometers (13.7 miles) in diameter and about 300 meters (1,000 feet) deep, exposing a much thicker stack of rock layers than those examined in Victoria Crater.

The rover team informally calls the bigger crater "Endeavour" and emphasizes that Opportunity may well never reach it. The rover has already operated more than 18 times longer than originally planned, and the distance to the big crater, about 12 kilometers (7 miles) matches the total distance Opportunity has driven since landing in early 2004. Driving southeastward is expected to take Opportunity to exposures of younger rock layers than is has previously seen and to provide access to rocks on the plain that were thrown long distances by impacts that excavated even deeper, more distant craters.

The crater that Opportunity will drive toward dominates this orbital view from the Thermal Emission Imaging System (THEMIS) camera on NASA's Mars Odyssey orbiter. The much smaller Victoria Crater is the most prominent circle near the upper left corner of the image. This view is a mosaic of about 50 separate visible-light images taken by THEMIS.

NASA's Jet Propulsion Laboratory manages the Mars Odyssey and Mars Exploration Rover missions for the NASA Science Mission Directorate, Washington, D.C. THEMIS was developed by Arizona State University, Tempe, in collaboration with Raytheon Santa Barbara Remote Sensing. The THEMIS investigation is led by Arizona State University. Lockheed Martin Astronautics, Denver, is the prime contractor for the Odyssey project, and developed and built the orbiter. Mission operations are conducted jointly from Lockheed Martin and from JPL, a division of the California Institute of Technology in Pasadena.