Looking Back at Arena of Exploration 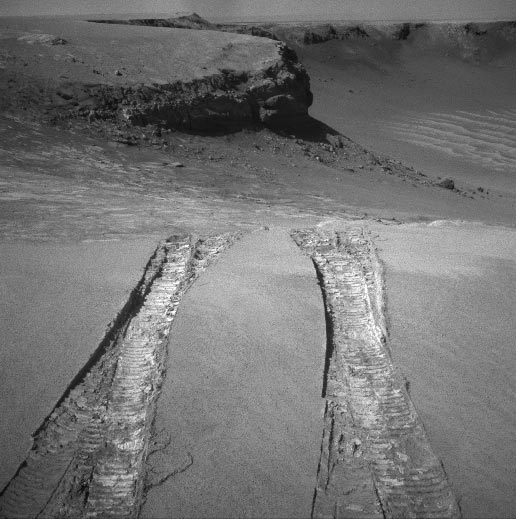 NASA's Mars Exploration Rover Opportunity climbed out of "Victoria Crater" following the tracks it had made when it descended into the 800-meter-diameter (half-mile-diameter) bowl nearly a year earlier.

The rover's navigation camera captured this view back into the crater just after finishing a 6.8-meter (22-foot) drive that brought Opportunity out onto level ground during the mission's 1,634th Martian day, or sol (Aug. 28, 2008).

The rover laid down the first tracks at this entry and exit point during its 1,291st sol (Sept. 11, 2007), after about a year of exploring around the outside of Victoria Crater for the best access route to the interior. On that sol, Opportunity drove a short distance into the crater and then backed out to check that the footing was good enough to trust this point as an exit route when the work in the crater was finished. Two sols later, Opportunity drove in again for its extended investigation of the rock layers exposed inside the crater.

While inside, the rover spent several months using the contact instruments on its robotic arm to analyze the composition of the rock layers it could drive across on the surface of the upper slope. Then Opportunity drove close to the base of the "Cape Verde" promontory that forms part of the crater rim and appears in the upper center of this image. From that perspective, the rover used its panoramic camera to examine details of layering in the 6-meter-tall (20-foot-tall) cliff.

For scale, the distance between the parallel tracks left by the rover's wheels is about 1 meter (39 inches) from the middle of one track to the middle of the other. After getting past the top of the inner slope of the crater, the Sol 1634 drive also got through a sand ripple where the tracks appear deepest.