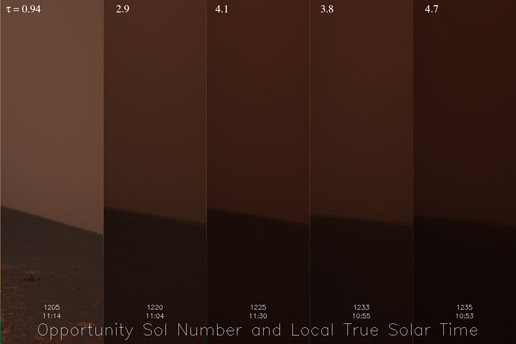 NASA's Opportunity rover is literally seeing some of its darkest days. Both Mars Exploration Rovers have been riding out a regional dust storm for several weeks. Conditions became particularly dreary in the Meridiani Planum region where Opportunity sits, perched on the edge of "Victoria Crater."

This image is a time-lapse composite where each horizon-survey image has been compressed horizontally (but not vertically) to emphasize the sky. The relative brightness and darkness of the sky from sol to sol (over a 30-sol period beginning June 14, 2007) is depicted accurately in these images, which view roughly the same part of the plains southwest of the rover. The images are approximately true color composites, generated from calibrated radiance data files using the panoramic camera's 601-nanometer, 535-nanometer and 482-nanometer filters.

The rovers' atmospheric science team is concerned that smaller, regional dust storms could expand into a larger, globe-encircling storm. That could extend the time the sun stays obscured, challenging the capability of Opportunity's solar panels to produce enough electricity for the rover to function.

Fortunately, as of July 19, 2007, the Opportunity site is clearing slightly. When the storm ends, atmospheric scientists hope to review data from the rovers that will help them determine what sort of dust was being lifted and distributed.

The numbers across the top of the image report a measurement of atmospheric opacity, called by the Greek letter tau. The lower the number, the clearer the sky. Both Opportunity and Spirit have been recording higher tau measurements in July 2007 than they had seen any time previously in their three and a half years on Mars. The five sol numbers across the bottom correspond (left to right) to June 14, June 30, July 5, July 13 and July 15, 2007.