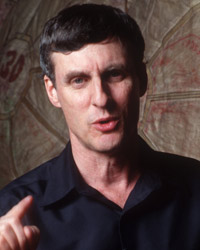 Steven W. Squyres is a professor of astronomy at Cornell University, Ithaca, N.Y., and the principal investigator for the science payload on NASA's Mars Exploration Rovers. Squyres has participated in a number of planetary spaceflight missions. From 1978 to 1981 he was an associate of the Voyager imaging science team, participating in analysis of imaging data from the encounters with Jupiter and Saturn. He was a radar investigator on the Magellan mission to Venus, a member of the Mars Observer gamma-ray spectrometer flight investigation team, and a co-investigator on the Russian Mars '96 mission. He is a member of the imaging science team on the Cassini mission to Saturn and was a member of the gamma-ray X-ray spectrometer team on NASA's Near Earth Asteroid Rendezvous mission. He received his Ph.D. from Cornell in 1981.
+ High-resolution JPEG (900Kb)
› Back To Top