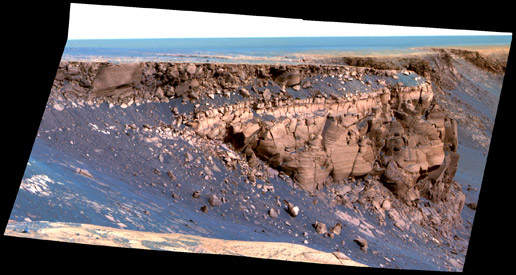 This image captured by NASA's Mars Exploration Rover Opportunity shows "Cape St. Vincent," one of the many promontories that jut out from the walls of Victoria Crater, Mars. The material at the top of the promontory consists of loose, jumbled rock, then a bit further down into the crater, abruptly transitions to solid bedrock. This transition point is marked by a bright band of rock, visible around the entire crater.

Scientists say this bright band represents what used to be the surface of Mars just before an impact formed Victoria Crater. After Opportunity begins to descend into the crater in early July 2007, it will examine the band carefully at an accessible location with a gentle slope. These investigations might help determine if the band's brighter appearance is the result of ancient interactions with the Martian atmosphere.

This image was taken by Opportunity's panoramic camera on sol 1167 (May 6, 2007). It is presented in false color to accentuate differences in surface materials.