Surveying the Scene Above Opportunity (Simulation) 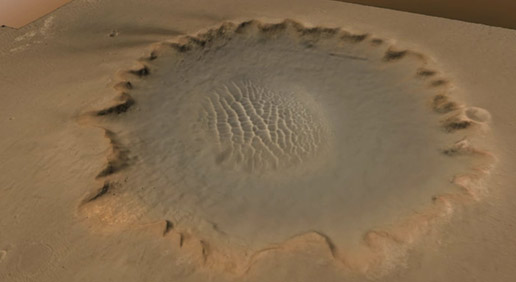 This animation shows a hypothetical flyover above Victoria Crater, where NASA's Mars Exploration Rover Opportunity is perched on a rim. The rover is expected to begin rolling down into the crater in early July 2007.

The first part of the movie is based on data taken by the Mars Reconnaissance Orbiter's High Resolution Imaging Science Experiment camera. A simulated rover is shown at the site where Opportunity will enter the crater, an alcove nicknamed "Duck Bay." The movie then transitions to a panoramic view of Victoria Crater taken from the top of Duck Bay by Opportunity's panoramic camera.