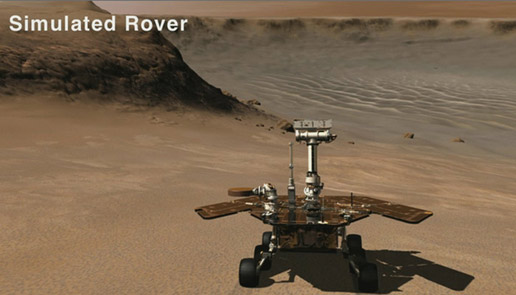 This animation shows a simulated rover descending into Victoria Crater via the rock-paved slopes of an alcove informally named "Duck Bay." NASA's Mars Exploration Rover Opportunity is expected to make a similar drive in early July 2007, on its way to examine older rocks deeper in the crater that might hold clues to Mars' wet past. The actual rover travels much more slowly and will make the trip in short segments, rather than in one long drive. Duck Bay has slopes of about 15 to 20 degrees and exposed bedrock, making it the safest site for Opportunity to enter the crater.

This movie is based on data taken by Opportunity's panoramic camera.