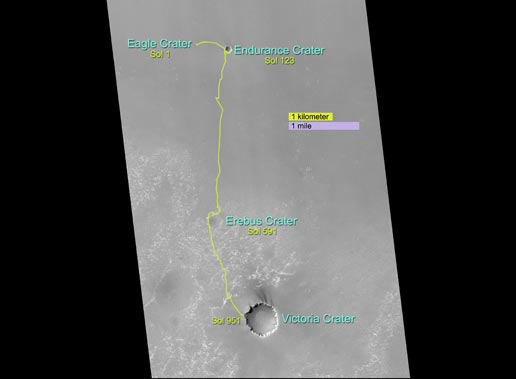 This movie maps out the travels of NASA's Mars Exploration Rover Opportunity, from is landing site at Eagle Crater to the rim of Victoria Crater about six miles (9.7 kilometers) away. The rover, which landed on the red planet more than three years ago, spent 21 months trekking across the plains of Meridiani Planum from Endurace Crater to reach Victoria Crater on sol 951 (Sept. 26, 2006).

Victoria is the largest crater encountered by Opportunity yet, at 800 meters (half a mile) across. Once there, the rover began to explore the rim of the crater, working around its sharp cliffs and gentle bays in a clockwise direction. It examined the cliffs' rock layers visible from rim viewpoints and it assessed the bays for a possible entry route. Opportunity then headed back to its original arrival point at Victoria, an alcove informally named "Duck Bay," where it is expected to roll into the crater in early July 2007.

The images making up the first map in this movie are from the Mars Observer Camera on NASA's Mars Global Surveyor, while the second map uses an image from the High Resolution Imaging Science Experiment on NASA's Mars Reconnaissance Orbiter.