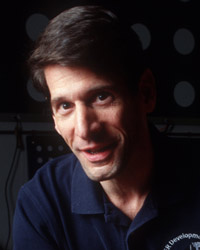 John L. Callas, of NASA's Jet Propulsion Laboratory, Pasadena, Calif., has been project manager of NASA's Mars Exploration Rover project since March 2006. Previously, as science manager and then deputy project manager, he had helped lead the rover project since 2000. Callas grew up near Boston, Mass. He received his Bachelor's degree in Engineering from Tufts University, Medford, Mass., in 1981 and his Masters and Ph.D. in Physics from Brown University, Providence, R.I., in 1983 and 1987, respectively. He joined JPL to work on advanced spacecraft propulsion, which included such futuristic concepts as electric, nuclear and antimatter propulsion. In 1989 he began work supporting the exploration of Mars with the Mars Observer mission and has since worked on seven Mars missions. In addition to his Mars work, Callas is involved in the development of instrumentation for astrophysics and planetary science, and teaches mathematics at Pasadena City College as an adjunct faculty member.
+ High-resolution JPEG (1Mb)
› Back To Top