NASA's Next Mars Spacecraft Crosses the Mississippi
A U.S. Air Force C-17 cargo aircraft carried NASA's Phoenix Mars Lander spacecraft Monday, May 7, from Colorado to Florida, where Phoenix will start a much longer trip in August.

After launch, Phoenix will land on a Martian arctic plain next spring. It will use a robotic digging arm and other instruments to determine whether the soil environment just beneath the surface could have been a favorable habitat for microbial life. Studies from orbit suggest that within arm's reach of the surface, the soil holds frozen water. 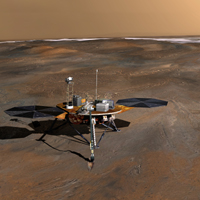 "This is a critical milestone for our mission," said Peter Smith of the University of Arizona, Tucson, principal investigator for Phoenix. "Our expert engineering team has completed assembly and testing of the spacecraft. The testing shows our instruments are capable of meeting the high-level requirements for the mission."

Workers have been assembling and testing the spacecraft for more than a year in Denver. "We're excited to be going back to Mars," said Ed Sedivy, Phoenix program manager at Lockheed Martin Space Systems Co., Denver. "Assembly, integration and testing of the spacecraft have gone very well. We delivered Phoenix stowed inside its back shell and it will stay in that configuration until it lands softly on Mars."

A Delta II launch vehicle will start Phoenix on its longer trip from Cape Canaveral Air Force Station, Fla. The earliest possible launch time will be Aug. 3, at 5:35 a.m. EDT. Opportunities for energy-efficient launches to Mars come about every two years. Orbital geometries of Mars and Earth make this year particularly favorable for sending a lander to far-northern Mars to arrive when sunshine is at a maximum there.

"The arctic plains are the right place for the next step in Mars exploration, and this is the right time to go there," said Leslie Tamppari, Phoenix project scientist at NASA's Jet Propulsion Laboratory, Pasadena, Calif. "We expect to touch Martian ice for the first time, a real leap in NASA's follow-the-water strategy. The lander needs solar energy, and we will arrive for a three-month prime mission right at the end of northern Mars' spring."

Phoenix will be prepared for launch in a payload processing facility at NASA's Kennedy Space Center, Florida. The first checkout activity will be a spin-balance test May 10 and 11. This will be followed on May 15 by installation of the heat shield and then a separation test. The next major milestones, during the third week of May, will be a landing radar integration test and launch system verification test. The last week of May will include an entry, descent and landing system verification test, followed by a guidance navigation and control test.

The rocket that will launch Phoenix is a Delta II 7925, manufactured by United Launch Alliance, Denver. The first stage is scheduled to be hoisted into the launcher of Pad 17-A at Cape Canaveral Air Force Station the third week of June. Nine strap-on solid rocket boosters will then be raised and attached. The second stage, which burns hypergolic propellants, will be hoisted atop the first stage the first week of July. The fairing, which surrounds the spacecraft, will then be hoisted into the clean room of the mobile service tower.

Next, engineers will perform several tests of the Delta II. In mid-July, as a leak check, the first stage will be loaded with liquid oxygen during a simulated countdown. The next day, a simulated flight test will be performed, simulating the vehicle’s post-liftoff flight events without fuel aboard. The electrical and mechanical systems of the entire Delta II will be exercised during this test. Once the Phoenix payload is placed atop the launch vehicle in the third week of July, a major test will be conducted: an integrated test of the Delta II and Phoenix working together. This will be a combined minus count and plus count, simulating all events as they will take place on launch day, but without propellants aboard the vehicle. Finally, one week before launch, the Delta II payload fairing will be installed around the Phoenix lander.

The NASA Launch Services Program at the Kennedy Space Center and the United Launch Alliance are responsible for the launch of the Delta II.

Phoenix is the first mission of NASA's Mars Scout Program of competitively proposed, relatively low-cost missions to Mars. Selected in 2003, Phoenix saves expense by using a lander structure and some other components originally built for a 2001 mission that was canceled while in development. Smith of the University of Arizona leads the Phoenix mission, with project management at JPL and development partnership at Lockheed Martin. International contributions are provided by the Canadian Space Agency, the University of Neuchatel (Switzerland), the University of Copenhagen (Denmark), the Max Planck Institute (Germany) and the Finnish Meteorological institute. JPL is a division of the California Institute of Technology in Pasadena. Additional information about Phoenix is available online at http://phoenix.lpl.arizona.edu.