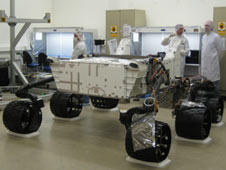 Engineers stand with the Mars Science Laboratory Credit: NASA/JPL
Larger view
WASHINGTON -- NASA is looking for the right stuff, or in this case, the right name for the next Mars rover. NASA, in cooperation with Walt Disney Studios Motion Pictures' movie WALL-E from Pixar Animation Studios, will conduct a naming contest for its car-sized Mars Science Laboratory rover that is scheduled for launch in 2009.

The contest begins Tuesday, Nov. 18, and is open to students 5 to 18 years old who attend a U.S. school and are enrolled in the current academic year. To enter the contest, students will submit essays explaining why their suggested name for the rover should be chosen. Essays must be received by Jan. 25, 2009. In March 2009, the public will have an opportunity to rank nine finalist names via the Internet as additional input for judges to consider during the selection process. NASA will announce the winning rover name in April 2009.

Disney will provide prizes to students submitting winning essays, including a trip to NASA's Jet Propulsion Laboratory in Pasadena, Calif., where the rover is under construction. The grand prize winner will have an opportunity to place a signature on the spacecraft and take part in the history of space exploration.

"Mars exploration has always captured the public imagination," said Mark Dahl, program executive for the Mars Science Laboratory at NASA Headquarters in Washington. "This contest will expand our ability to inspire students' interest in science and give the public a chance to participate in NASA's next expedition to Mars."

Walt Disney Studios Motion Pictures in Burbank, Calif., will make it possible for WALL-E, the name of its animated robotic hero and summer 2008 movie, to appear in online content inviting students to participate in the naming contest. The online WALL-E content will provide young viewers with a current connection to the human-robotic partnership that is transforming discovery and exploration. The contest coincides with Walt Disney Studios Home Entertainment's release of WALL-E on DVD and Blu-ray. The naming contest partnership is part of a Space Act Agreement between NASA and Disney designed to use the appeal of WALL-E in educational and public outreach efforts.

"All of us at Disney are delighted to be working with NASA in its educational and public outreach efforts to teach schoolchildren about space exploration, robot technology and the universe in which they live," said Mark Zoradi, president of Walt Disney Studios Motion Pictures Group. "WALL-E is one of the most lovable and entertaining characters that Pixar has ever created, and he is the perfect spokes-robot for this program."

The Mars Science Laboratory rover will be larger and more capable than any craft previously sent to land there. It will check whether the environment in a carefully selected landing region ever has been favorable for supporting microbial life. The rover will search for minerals that formed in the presence of water and look for several chemical building blocks of life.

"We are now in a phase when we're building and testing the rover before its journey to Mars," said John Klein, deputy project manager for the Mars Science Laboratory at JPL. "As the rover comes together and begins to take shape, the whole team can't wait to call it by name."

Additional assignments include imaging its surroundings in high definition, analyzing rocks with a high-powered laser beam, inspecting rocks and soil with a six-foot robotic arm, and cooking and sniffing rock powder delivered from a hammering drill to investigate what minerals are in Martian rocks.

JPL, a division of the California Institute of Technology, Pasadena, manages the Mars Science Laboratory Project for the NASA Science Mission Directorate, Washington.