An Engineer's First Trip to Mars
Tracy Drain ticks off the complex chain of mission planning and software programming required for NASA's latest Mars orbiter to reach its destination. Drain, a mechanical engineer with the Mars Reconnaissance Orbiter mission for five years, is a blend of technical prowess and controlled exuberance. 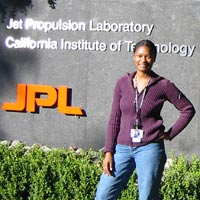 On March 10, over a two-hour period, the spacecraft will gradually begin easing itself into a wide elliptical orbit around Mars. For a nail-biting 30 minutes or so, mission engineers will lose the spacecraft's signal as it circles behind the planet. "There is no joy-sticking it to get into orbit around Mars," jokes Drain, who has spent much of the cruise, or travel, phase sending commands up to the spacecraft.

During the crucial hours of entering Mars orbit, Drain and the mission team will only be able to monitor events as they occur billions of miles away. The spacecraft will largely be on its own, its maneuvers tested, re-tested and finally pre-programmed by the operations team during the seven-month journey to Mars.

"At orbit insertion, it's almost like launch," says Drain. "All the testing, making sure all your ducks are in a row, having everything prepared and then sitting back and going along for the ride. It's like we're at the top of the rollercoaster, the chains are clinking, and here we go!" 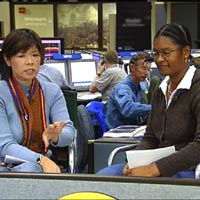 NASA TV will carry the event live from JPL's mission support area, where engineers will be awaiting signals from the spacecraft. With her expertise in the spacecraft and its subsystems, Drain is tapped to be a special commentator for the program, on hand to explain mission activities and interpret technical jargon for the media and public.

As a nine-year-old growing up in Louisville, Ky, Tracy Williams (Drain's maiden name) learned how scientists explained the formation of our solar system. She was intrigued by how they knew about events that happened so long ago. Her interest stayed with her through high school, where she also had a penchant for math and science. School advisors suggested she consider engineering as a path that might combine her skills and interests.

Drain attended the University of Kentucky and gained her first experience with NASA through internships at the NASA Langley Research Center in Hampton, Va. For two summers and two semesters, she worked on various tasks, including materials testing and wind tunnel testing. In 1998, she received a bachelor's degree in mechanical engineering and continued her studies at the Georgia Institute of Technology, Atlanta, earning a master's in mechanical engineering in 2000.

She joined JPL later that year, working briefly on advanced studies for future missions to Mars. In 2001, Drain joined the still-under-development Mars Reconnaissance Orbiter mission, which exposed her to a mission from inception to execution.

"I'm looking forward to seeing the culmination of all that we have worked towards on the Mars Reconnaissance Orbiter," says Drain enthusiastically. "It has been fantastic participating in a mission that we expect will add so much to our knowledge of Mars."

Drain plans to stay with the mission for the first few months in orbit at Mars, helping oversee plans for returning some of the first science data from the spacecraft. After that she would like to return to future mission studies or use her experiences gained from this mission to contribute to another, starting the cycle again.