NASA Mars Spacecraft Gear Up for Extra Work
NASA's Mars robotic missions are performing so well, they are being prepared for additional overtime work.

The team operating the twin Mars Exploration Rovers, Spirit and Opportunity, since January 2004, won approval for an additional year of exploration. NASA funded the extensions on recommendations from an outside panel of scientists. NASA also is adding two more years of operations for Mars Global Surveyor, which has been orbiting Mars since 1997, and the Mars Odyssey orbiter, at the red planet since 2001. 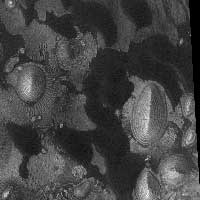 Image right: Old and new come together in this image of the floor of an unnamed impact crater. The light-toned, layered mounds scattered across the image are old. The dark-toned sand dunes and intermediate-toned ripples are new. Image credit: NASA/JPL/Malin Space Science Systems
+ Full image and caption
+ Browse version of image

These mission extensions will begin Oct. 1, 2006. The spacecraft beginning extended missions have already completed a successful prime mission plus years of additional service. The extensions occur when NASA's newest Mars spacecraft, named the Mars Reconnaissance Orbiter, is about to begin its main science phase.

"Each of these missions increases the value of the others and of the Mars Reconnaissance Orbiter," said Doug McCuistion, director of NASA's Mars Exploration Program, NASA Headquarters, Washington. "By extending these missions, we gain very cost-effective additional benefits from the investments in developing them and getting them to Mars."

Each orbiter has a different set of instruments, and the spacecraft complement each other in helping scientists understand Mars. Also, observations by the rovers on the ground validate interpretation of information from the orbiters. Observations by the orbiters allow extrapolation from what the rovers find in small areas. The orbiters support current and future surface missions with landing-site assessments and communication relays.

Both rovers are still healthy, more than 31 months into what was originally planned as a three-month exploration of their landing areas. Provided they remain operable, their fourth mission extension will take them into Martian spring and summer, increasing their solar-energy supply and daily capabilities. Spirit has been studying its surroundings from a stationary, sun-facing tilt for several months. "As we get into the Martian spring, Spirit will resume exploring the inner basin of the 'Columbia Hills,'" said Dr. Bruce Banerdt, rover project scientist at NASA's Jet Propulsion Laboratory, Pasadena, Calif. Opportunity will spend the extension at "Victoria Crater."

Each Martian year lasts nearly two Earth years. The longevity of Mars Global Surveyor and Mars Odyssey has allowed researchers to watch how Mars changes not just from season to season, but from year to year. Mars Global Surveyor has observed shrinking of the south polar carbon-dioxide ice cap from one summer to the next. "This extension will take us through our fifth annual cycle of Martian summers and winters," said Thomas Thorpe of JPL, project manager for Mars Global Surveyor.

"With the additional years of observations, we are able to monitor the Martian climate, not just the weather. There is a hypothesis that Mars' climate is changing, perhaps rapidly. The combination of instruments from different orbiters strengthens our ability to study that possibility. With Odyssey, for example, we can monitor the mass of carbon-dioxide frost in winter to help understand the changes that Global Surveyor is seeing in the summers," said JPL's Dr. Jeffrey Plaut, project scientist for Mars Odyssey.

The Odyssey flight team at JPL and at Lockheed Martin Space Systems, Denver, plans to teach the spacecraft some new tricks during the mission extension. New software will enable the spacecraft to make choices about which images are high priority. Also, the team will begin pointing Odyssey slightly off the straight-down view it has flown so far. This will enable imaging of polar areas it never flies directly over. Odyssey also will continue serving as the primary communications relay for the rovers Spirit and Opportunity.

NASA also has extended the U.S. participation in the European Space Agency's Mars Express mission. That orbiter reached Mars in 2003 and is in an extended mission.

JPL, a division of the California Institute of Technology, Pasadena, manages the Mars Global Surveyor, Mars Odyssey and Mars Exploration Rover projects for the NASA Science Mission Directorate, Washington. Lockheed Martin Space Systems, Denver, is the prime contractor for the Global Surveyor and Odyssey projects and built those spacecraft.