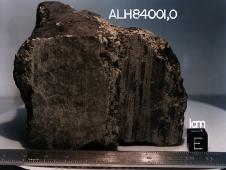 This 4.5 billion-year-old rock, labeled meteorite ALH84001, is believed to have once been a part of Mars and to contain fossil evidence that primitive life may have existed on Mars more than 3.6 billion years ago. Image credit: NASA/JSC/Stanford University
› Full image and caption

WASHINGTON -- NASA-funded research on Mars meteorites that landed on Earth shows strong evidence that very large molecules containing carbon, which is a key ingredient for the building blocks of life, can originate on the Red Planet. These macromolecules are not of biological origin, but they are indicators that complex carbon chemistry has taken place on Mars.

Researchers from the Carnegie Institution for Science in Washington who found reduced carbon molecules now have better insight into the chemical processes taking place on Mars. Reduced carbon is carbon that is bonded to hydrogen or itself. Their findings also may assist in future quests for evidence of life on the Red Planet. The findings are published in Thursday's online edition of Science Express.

"These findings show that the storage of reduced carbon molecules on Mars occurred throughout the planet's history and might have been similar to processes that occurred on the ancient Earth," said Andrew Steele, lead author of the paper and researcher from Carnegie. "Understanding the genesis of these non-biological, carbon-containing macromolecules on Mars is crucial for developing future missions to detect evidence of life on our neighboring planet."

Finding molecules containing large chains of carbon and hydrogen has been one objective of past and present Mars missions. Such molecules have been found previously in Mars meteorites, but scientists have disagreed about how the carbon in them was formed and whether it came from Mars. This new information proves Mars can produce organic carbon.

"Although this study has not yielded evidence that Mars has or once may have supported life, it does address some important questions about the sources of organic carbon on Mars," said Mary Voytek, director of NASA's Astrobiology Program at the agency's Headquarters in Washington. "With the Curiosity rover scheduled to land in August, these new research results may help Mars Science Laboratory scientists fine-tune their investigations on the surface of the planet by understanding where organic carbon may be found and how it is preserved."

Scientists have theorized that the large carbon macromolecules detected on Martian meteorites could have originated from terrestrial contamination from Earth or other meteorites, or chemical reactions or biological activity on Mars.

Steele's team examined samples from 11 Martian meteorites from a period spanning about 4.2 billion years of Martian history. They detected large carbon compounds in 10 of them. The molecules were found inside grains of crystallized minerals.

Using an array of sophisticated research techniques, the team was able to show that at least some of the macromolecules of carbon were indigenous to the meteorites themselves and not contamination from Earth.

The team next looked at the carbon molecules in relation to other minerals in the meteorites to see what kinds of chemical processing these samples endured before arriving on Earth. The crystalline grains encasing the carbon compounds provided a window into how the carbon molecules were created. Their findings indicate that the carbon was created by volcanic activity on Mars and show that Mars has been doing organic chemistry for most of its history.

In a separate paper published by American Mineralogist, Steele and his team report their findings on the same meteorite announced in 1996 to contain possible -- but subsequently discounted -- relics of ancient biological life on Mars. Called ALH84001, the meteorite was found to also contain organic macromolecules of non-biological origin.

The Steele team's research indicates that Mars does have a pool of reduced carbon. Their findings should help scientists involved in current and future Mars missions distinguish non-biologically formed carbon molecules from potential life.